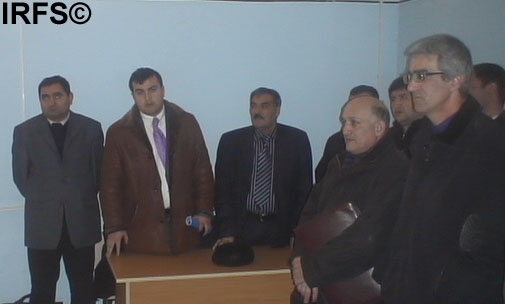 Today, 21 January, in the Yasamal District Court, under the chairmanship of Judge Abbas Rzayev, a preliminary hearing was held on the lawsuit of Ganja City Education Department Head Mahal Aliyev against "21st Century Education Center" Public Union Chairman Etibar Aliyev under article 147.2 (slander accusing someone of committing a grave or especially grave crime).
The last preliminary hearing was postponed due a motion put forth by defendant E.Aliyev’s lawyers to protest the judge. Today Judge Rzayev said that there is no reasonable evidence for the objection and therefore announced a decision not to consider the motion.
Then the defendant’s lawyer Elchin Sadigov demanded that the special plaintiff also participate in the hearing and stated that sides have a right to interrogate him during the hearing. Expressing his opinion about this motion, the plaintiff's representative Javad Javadov said that M.Aliyev participated in the first hearing, but will not be able to participate in the next hearings due to his workload.  The judge ruled out this motion, stating that the hearing will go on without the plaintiff’s participation.
Then defendant E. Aliyev said that his interview that was published in "Azadlig" Newspaper on 24 September 2008 was not covered as it was and some opinions have been misrepresented. He submitted a copy of the letter he sent to “Azadlig” newspaper editorial office and a letter he had received that was signed by the newspaper’s director regarding this issue to the court. It is noted in the letter that corrections would be made in the next issues of the newspaper.
Defendant’s lawyer E. Sadigov reminded the court that there is enough information on the internet about M. Aliyev that is no different from E. Aliyev’s opinions and according to the legislation, neither the author nor mass media take responsibility when writing or voicing opinions which have been previously written. Sadigov noted that in fact M.Aliyev has been imprisoned for bribery and that this is fact.
After the sides spoke, Judge Rzayev said that the case would be accepted for consideration and scheduled the next hearing for 29 January, 4:00 p.m.
This lawsuit stems from an interview with E. Aliyev that was published in "Azadlig" Newspaper on 24 September 2008. E. Aliyev talked about corruption and bribery within the Ganja City Education Department during the interview.
Previous Post