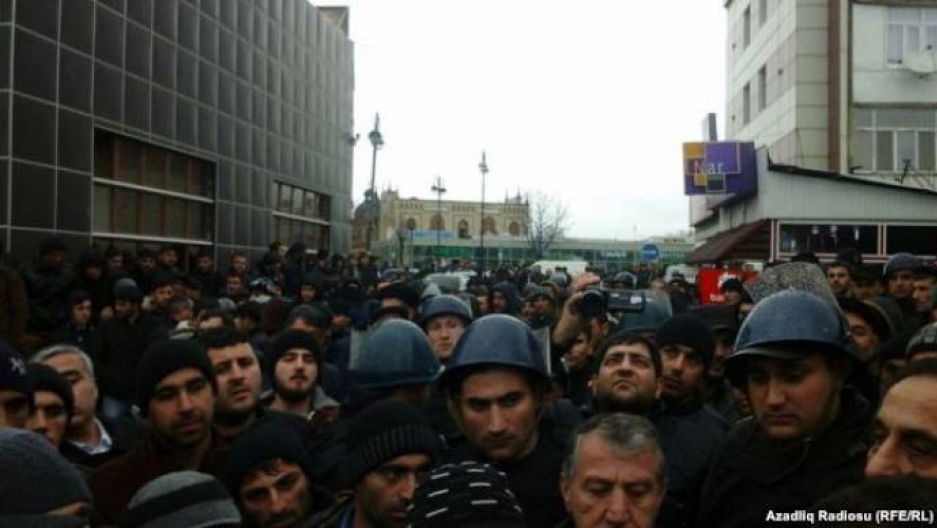 Hundreds of people have taken to the streets across Azerbaijan, to protest against price hikes, following the collapse of the country’s currency, the Manat—which has lost almost half of its value against the U.S. dollar in recent days.

As such, on January 12, a group of residents held a protest in Liman, a city in Azerbaijan’s Lankaran region.

The protesters attempted to block the Alat-Astara highway, quickly attracting the attention of local police forces and the regional authorities.

According to the Lankaran Regional Executive Power, nearly 100 people attempted to block the Alat-Astara highway, but following negotiations with the Lankaran City Executive Power and law enforcement officers, the protesters dispersed. The situation is now stable.

On the same day, residents in Aghjabadi also staged a demonstration[1] against price hikes and unemployment, Radio Liberty has reported. Rashid Najafli, the chairman of the regional branch of Musavat Party, told the Radio Liberty that during the protest, an IDP had climbed onto the roof of a building, threatening suicide. Fortunately he was persuaded to come down. According to Najafli, he had been driven to despair by his inability to buy bread for his family.

According to Radio Liberty, the regional governor, police chief, prosecutor and employees of the Ministry of Emergency Situations arrived at the demonstration. The protesters raised the problems of unemployment and financial with officials, and the protest ended after the local governor promised to address their complaints.

However, the femida.az website quoted Police Captain Gulmali Orujov, a district police chief of Aghjabadi Regional Police Department, as saying that no protest had been held in Aghjabadi, but three suicide attempts had been prevented.

Similarly, in Siyazan region, a group of people gathered outside the regional executive power building to demand that the problems of unemployment and bank loan repayment be addressed.

Approximately 300-400 people joined the protest, nearly 40 of whom were received by deputies of the Chief of the Executive Power. However, the demonstrators demanded a meeting with the Chief himself, who acceded to their demands.

Zafar Aliyev, a deputy of the Siyazan Regional Executive Power Chief, said that the main concerns of the demonstrators were the increases in the price of flour and other food products. “They also requested that the poultry farm employees forced to go on unpaid leave be provided with jobs.”

According to Zafar Aliyev, Siyazan Regional Executive Power Chief Asif Huseynov received the citizens. “At the meeting, the district residents asked for a meeting with Tahir Suleymanov, who the MP for Shabran-Siyazan election constituency #54. A meeting is scheduled for January 13 at 09.00, in the Palace of Culture.”

After two devaluations, the first on February 21 2015 and the second on December 21 2015, Azerbaijan’s national currency, the manat, lost nearly 90 percent of its value. This  was followed by a steep rise in commodity prices across the country.