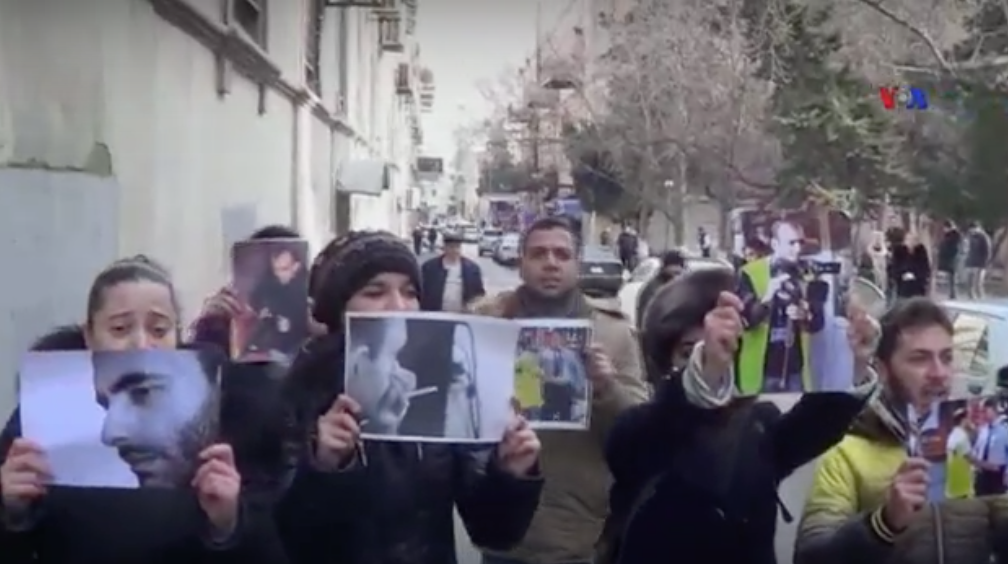 On January 12, Baku Grave Crimes Court held a hearing on the criminal case against Elshan Ismayilov, Jamal Mammadov, Arif Aliyev, Samir Mustafayev, and Kanan Madatov, who are being charged in relation to the death of journalist Rasim Aliyev. Numerous journalists were not allowed to attend the court hearing on the pretext that the courtroom was too small. Journalists had also been barred from the previous hearing on January 5.

A group of around ten journalists held a picket in front of the court building to protest the denial of access to the hearing.

They held up photos by Rasim Aliyev and posters that read, “Punish the doctors!” “Bring doctors to justice!” and “Stop killings of journalists!”.

Police officers both in uniform and civilian clothes used violence against the participants.

Journalist Fergana Novruzova, part of the picket, reported that the police forcibly confiscated the photos, and used physical force against them.

When asked if they had notified the Baku City Executive Power of the picket in advance, Fergana Novruzova said that they had not.

According to Article 5 of the Law on Freedom of Assembly, the relevant executive power body must be notified in writing about the gatherings (picket, street procession, rally, demonstration) in advance. In order to allow the relevant executive power body to make necessary arrangements, the notification has to be submitted, as a rule, at least 5 days prior to the day of the intended gathering for coordinating its time and venue and the route of a street procession.