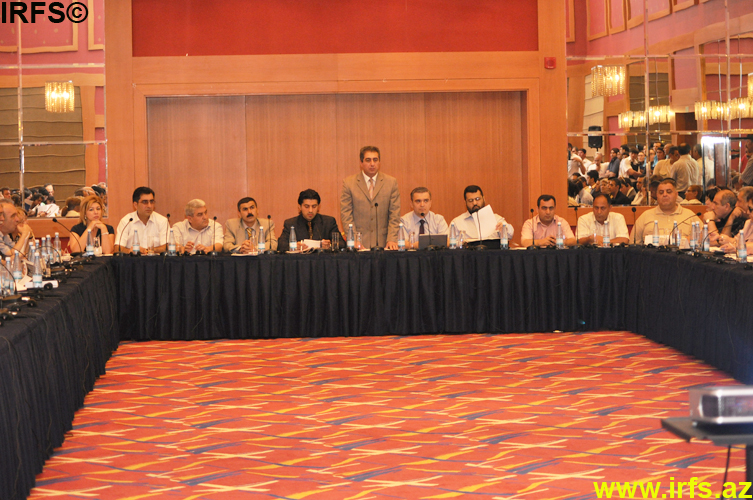 Today, 18 June, in the “Dan Ulduzu” Hall of “Park Inn” Hotel, the Civil Society Defense Committee (CSDC) conducted a forum to discuss the situation in connection with the proposed changes and additions to Azerbaijan Republic Law Non-governmental Organizations (Public Unions and Foundations). Representatives of the diplomatic corps and international organizations in Azerbaijan, national deputies (parliamentarians), NGO leaders, and representatives of political parties and mass media participated in the forum.
CSDC Working Group members, Center for Economic Research head Gubad Ibadoglu, Institute for Reporters’ Freedom and Safety Chairman Emin Huseynov, Co-founder of “Respublikachi alternative” (REAL) Civil Union Erkin Gadirli, and Chairman of “Hugug ve Inkishaf” (Law and Development) Public Union Hafiz Hasanov spoke during the forum and expressed their opinions about the proposed draft law. They emphasized that the draft laws on NGOs and Mass Media should be rejected completely and said the amendments are intended to destroy civil society and freedom of speech. In addition, these changes will restrict the work of independent NGOs and mass media outlets, to the point the point that they may actually close.
Then parliamentarians Panah Huseyn, Gudrat Hasanguliyev, Musavat Party Leader Isa Ganbar, APFP Head Ali Karimli and other forum participants spoke and expressed concern in connection with the proposed changes and amendments to the Law on Non-governmental Organizations (Public Unions and Funds).
Working group members stated that 118 NGOs appealed to CSDC through official signatures and about 50 NGOs appealed via email for membership.

Forum participants were told that a protest action has been scheduled to take place in front of Milli Mejlis at noon tomorrow, 19 June. CSDC members noted the Mayor’s office refused to grant permission for the action, but, despite this, the protest will only be cancelled if the draft law is removed from the agenda of the Milli Mejlis.
Participants noted that rumors were spread yesterday that the amendments to the NGO Law would not be considered, however later it was determined that the amendments were still under the agenda but under a different name. Today people were under the impression that the NGO law amendments are now the last thing scheduled to be discussed at tomorrow’s session of parliament. At the same time, some people are saying this could mean there won’t actually be enough time for the discussion and it will be moved to 30 June.
CSDC Working Group member Emin Huseynov noted that invitations were sent to all political parties, all Milli Mejlis members, Presidential Administration Socio-political department Head Ali Hasanov, State Committee for Work with Refugees and IDP head Ali Huseynov, the Ministry of Foreign Affairs Eldar Mammadyarov to participate in the forum. However, none of these people were present at the event.
At the end of the forum, an appeal addressed to Azerbaijani society, Azerbaijan Republic Milli Mejlis, Azerbaijan Republic President, Council of Europe and international organizations was issued.