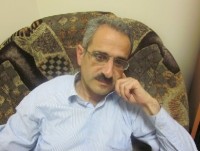 The arrest of Tolishi-Sado editor-in-chief Hilal Mammadov is an unprecedented legal violation on the part of law enforcement agencies in Azerbaijan.
This was the keynote of today’s press conference held at the Institute for Reporters’ Freedom and Safety.
Hilal’s wife Bahar Mammadova said that she was shocked by the rudeness and unruliness of the officers, who conducted search in their apartment. As she described, 25 persons entered their flat and messed it. Finally they told Mammadova that they had found drug in a jacket pocket.
“I had checked this pocket for money when I went shopping that morning. When I told them about it, they answered: “Is it difficult to put that drug there?” I was shocked by their insolence” said Mammadova. The search was conducted without a sanction.
Rafig Jalilov, head of the Committee for the protection of Hilal Mammadov’s rights, noted that Mammadov’s arrest had been planned 2 months before. According to Jalilov, on May 25th and 26th Gundam Khabar newspaper wrote that Tolishi-Sado newspaper was engaged in separatism. “In fact, the newspaper has not been published for more than a year”. Jalilov believes that the June 9th meeting organized by Talysh Cultural Center in Masalli region accelerated Mammadov’s arrest, as that meeting decided to restore publishing Tolishi-Sado newspaper.
Jalilov also believes that another reason behind Mammadov’s arrest could be his video “Ti kto takoy davay dosvidaniya” (“Who are you, go away”) disseminated via social networking sites. He did not exclude that Mammadov’s statement that this video brought more fame to Azerbaijan than the Eurovision Contest enraged the wife of the President, Mehriban Aliyeva, which was the reason for the persecution of the activist.
Lawyer Ramiz Mammadov noted that Hilal Mammadov has not yet had blood test. Furthermore, investigation hastily examined the found drug and determined that it was heroin.
He added that Hilal Mammadov was subjected to physical pressure during his detention. There are traces of violence on his body.  Nizami District Prosecutor’s Office is investigating the case. The Committee appealed to president Ilham Aliyev and asked him to express his attitude to Mammadov’s arrest. The appeal was signed by more than 40 well-known politicians, scientists, public figures, intellectuals and journalists. The Committee intends to continue campaigning for the rights of Mammadov both in Azerbaijan and abroad.
Tolishi-Sado newspaper editor-in-chief Hilal Mammadov was arrested on June 21st. Nizami District Police Office has launched a criminal case against Mammadov under Article 234.4.3 of the Criminal Code (illegal manufacture, purchase, storage, transfer, transport or sale of drugs in a large quantity). Under this Article Mammadov could face confiscation of his property and imprisonment for up to 12 years. On June 22nd, Nizami District Court sentenced Hilal Mammadov to 3 months of pre-trial detention.
Previous Post