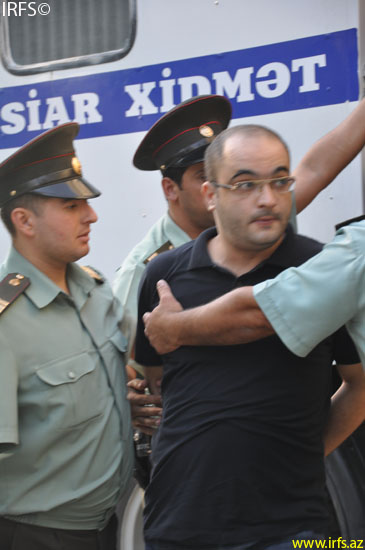 Today, 25 May, Emin Fastullayev visited his son, imprisoned Editor-in-Chief of "Gundelik Azerbayjan" and "Realny Azerbayjan" Newspapers Eynulla Fatullayev in Prison #12. Emin Fatullayev told this to the Institute for Reporters’ Freedom and Safety.
Communication Period in connection with E.Fatullayev’s appeal to the European Court of Human Rights will be over soon, and the documents will be sent to the ECHR by lawyer Isakhan Ashurov until 27 May, said father Fatullayev.
Eynulla Fatullayev’s situation is normal and he does not have any complaints about prison conditions, according to Emin Fatullayev.
"Gundelik Azerbayjan" and "Realny Azerbayjan" newspapers' Editor-in-Chief Eynulla Fatullayev was sentenced to 2.5 years of imprisonment on 21 April 2007 for insulting honor and dignity.  Later he was convicted under articles 214.1 (threatening terror), 283.2.2 (incitement of ethnic/national, social or religious hatred abusing authority), and 213.2.2 (tax evasion) of the Criminal Code and was sentenced to 8.5 years of imprisonment on 30 October 2007.
Previous Post