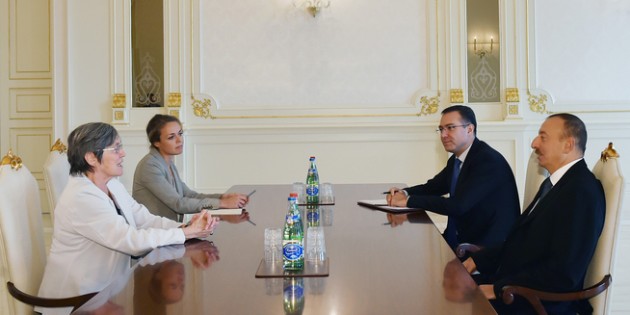 In April of this year, Azerbaijan lost its “full member” status at the organization and gained a “candidate” status, which shows that the civil society in Azerbaijan is facing a problematic situation.

According to her, President Aliyev related the pressures against the civil society to “some instability in the region.”

Clare Short served as the UK’s Secretary of State for International Development in 1997-2003. Below you can read her interview with BBC Azerbaijan.

– How did you decide to visit Azerbaijan? Whose initiative was it?

At the International Council of Extractive Industry Transparency Initiative, EITI, we had debates over this organization’s attitude towards the civil society. Some representatives of the civil society said that there is not sufficient freedom in this country and therefore Azerbaijan should be removed from EITI. EITI and its council required that Azerbaijan prepare a report about this and they prepared and submitted a report. It was at the time of these debates that we decided to send a representative there. We applied and after that received an invitation from the presidential administration. Thus, I had the opportunity to make a visit and clarify the issues.

– What did you talk about?

I told him that Azerbaijan was one of the first countries to apply the extractive industries transparency initiative. However, the present restrictions applied to the freedom of the civil society violate the principles of EITI. We are not an organization enforcing human rights, but our rules require accountability in the council and civil society’s involvement in the sphere of countrywide information exchange. A series of restrictions imposed in Azerbaijan means that civil society representatives at EITI cannot operate freely.

He said: “Yes, we have imposed the restrictions on the civil society because of the Maidan events in Ukraine and other events taking place in the region. But I am proud that I put our country’s signature at EITI in London in 2003. I’d like that we remain in this organization. If anyone gives us concrete explanation of what the problems are, I will give an order for elimination of those problems, so that the civil society can freely operate within EITI.”

– It is very interesting. Because, it is the first time that President Aliyev somewhat confirmed the word “restrictions.” They used to say that no specific individuals or NGOs were targeted, but criminal cases were launched in compliance with the law. So, it means he in fact admitted it?

He talked about the instability in the region and said that, for example, some people were arrested in connection with cases such as Molotov cocktails. I know nothing about such events. What he tried to convey is that persecutions happened because of the people who wanted to destabilize the country. But, he does not want to restrict the civil society’s freedom within EITI. This is what he said.

– Did you talk with him about a specific case or criminal case?

No, I did not. Because, of course, he promised and asked for details in order to settle the matter. EITI’s next report on Azerbaijan will appear in 2016. We will observe his commitment to his pledge until then. We will make the decision after that.

– What were your impressions? Did Mr. Aliyev seem to you as a person ready and committed to make these changes?

My impression was that he is not indifferent to EITI. He spoke proudly about the London visit and signing of membership. In my opinion, he was speaking frankly when he said that he did not see any obstacle to free activity of the civil society within EITI. But time will tell. He made a strong promise. These changes need to be made or there will be a problem. The matter is too clear.

– What changes did you see in Azerbaijan since the Council’s meeting of April 2015?

The ambassadors’ view is that the situation continues to deteriorate. They believe that it harms the potential future of Azerbaijan and the environment for investments in the country. They really want to hope that the changes that will start with EITI will be a turning point and after a while the situation will stop worsening. I mean, they live there and this is how they comment. I am not well informed about the broader situation. These are their views.