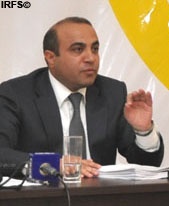 Today, 28 January, the Council of State Support to NGOs under the President of the Republic of Azerbaijan presented a report regarding its activity.
Council Chairman Azay Guliyev said that 248 of the 613 project proposals presented to the Council in 2009 were financed, and a book named “Financed projects in 2009” was published. Guliyev added that several organizations had problems regarding the implementation of the projects. These organizations will not be able to appeal for financial aid from the Council for the following two years.
The Executive Director of the Council Secretariat Farasat Gurbanov said that 589 people were provided with permanent work as a result of grants allocated to NGOs, but 501 people were provided with temporary work.
In addition, more than 106,000 people benefited from grant projects implemented in 2009.
Previous Post