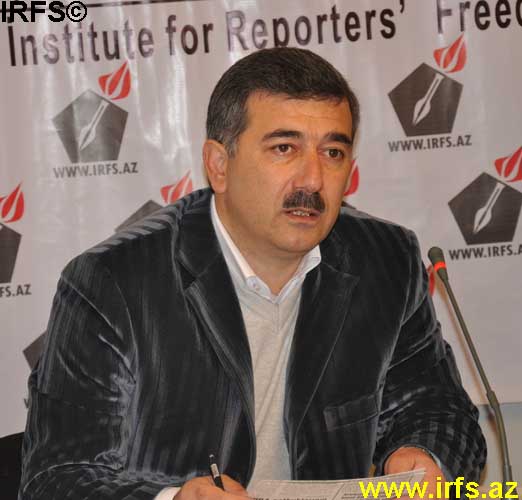 Today, 28 January, in the press center of the Institute for Reporters’ Freedom and Safety, the Civil Society Support Coalition conducted a meeting regarding the problems of civil society.

Civil Society Support Coalition Coordinator Razi Nurullayev said that CSSC issued a decision to create a Network of NGOs that have not been registered. Nurullayev added that there is a need to create a working group to investigate and solve other problems of the civil society.
Council member of the Civil Society Support Coalition Ogtay Gulaliyev said that the civil society has been facing several problems following changes made to Law on NGOs signed in June 2009 and the Presidential Decree signed on 30 December.
He also touched upon change made to Apartment Code hampering the NGOs to operate in private apartments.
“Allowing bank operations only after the registration of NGO agreements in the Ministry of Justice, presenting reports of NGOs to the Ministry of Finance no later than 1 April every year, failure by the government to register a number of NGOs recently, and the low level of the institutional support to the third sector for their normal operation are the factors hindering the operation and development of the civil society institutions in our country today. An appeal has been prepared to President Ilham Aliyev for the solution of all these problems,” said O.Gulaliyev, who then presented the appeal to the participants.
Other civil society representatives participating in the event – Vahid Gazi, Emin Huseynov, Telman Zeynalov, Azer Hesret and others expressed their suggestions and criticism related to the appeal written to the President. Civil Society Support Coalition Coordinator R.Nurullayev said that the appeal will be revised after the proposals and criticisms are considered and will be presented to the civil society representatives to be signed.