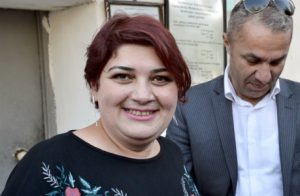 Binagadi District Court has deferred the hearing on the request to lift the international travel ban off journalist Khadija Ismayilova. According to the journalist, she objected to the postponement of the hearing. “However, the judge put off the hearing citing the absence of the prosecutor and the enforcement agent,” Ismayilova noted.
Khadija Ismayilova appealed to Binagadi District Court of Baku on 22 September to revoke her international travel ban.

Background: Khadija Ismayilova was arrested on 5 December 2014 and subsequently sentenced to 7 years and 6 months in jail.
The journalist was released on 25 May 2016, when the Supreme Court commuted her sentence to 3 years and 6 months of conditional imprisonment.