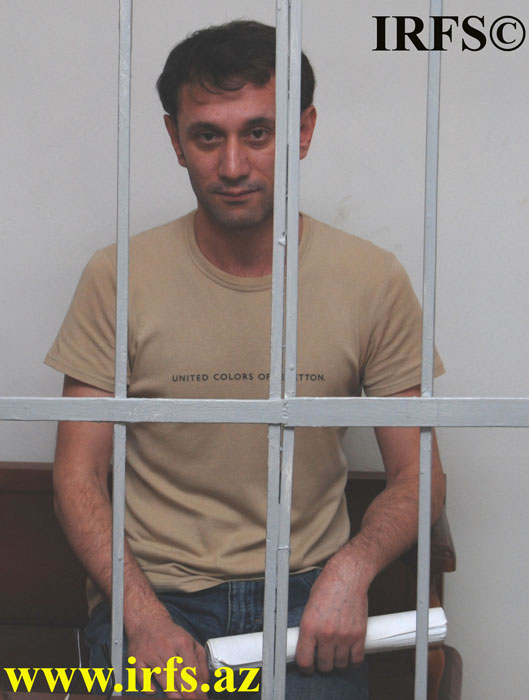 Today, 9 July, in the Nasimi District Court, under the chairmanship of Judge Shahin Abdullayev, a hearing was conducted on the case against Sergey Stekalin, who is accused of stabbing “Azadlig” Newspaper correspondent Agil Khalil on 13 March 2008.

The hearing opened with Khalil’s lawyer Elchin Sadigov putting forth motions. Sadigov noted that it is possible through two internet sites, izon.ru and yacoon.tk, to send SMS messages with past dates on them, and presented documents on this matter to Judge Abdullayev. Sadigov asked the judge to assess this information as evidence and to include the information in the list of evidence.

Khalil received permission to speak from the judge, and noted that it is possible for one person to send SMS messages from other people’s telephones. He recalled that SMS messages were sent to local intellectuals and editors from a former military colleague of Khalil named Kenan Ismayilov in the name of “Azadlig” Newspaper correspondent Fikret Huseynli (see http://www.irfs.az/content/view/588/lang,en/).

As in the past, the State Prosecutor and S. Strekalin’s lawyers protested against all of Sadigov’s motions, and the judge decided to deny all of them.

After this, appraisal of evidence included in the criminal case material was conducted.  The judge noted court and investigative decisions to acquire telephone conversations, the transcripts from interrogations, expert opinions, and results from reenactments of the stabbing.

Sadigov said that the telephone conversations and copies of the SMS’s were sent to the Chief Prosecutor’s Office by the National Security Ministry, and noted that this is perplexing. A court decision on this matter was adopted on the basis of a petition from the Chief Prosecutor’s Office, however Sadigov noted it was suspicious that in response to this petition, “Azercell” BM purportedly sent its response to the Ministry of National Security.

Judge Abdullayev announced that the court investigation was over and inquired if the parties need time to prepare for closing arguments. Taking into consideration their responses, the judge scheduled the next hearing for 14 July at 10:30 a.m.