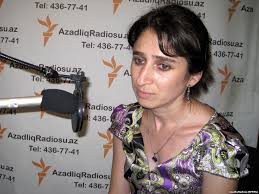 Nasimi District Court has refused to accept for consideration the supervisory complaint filed by Aynur Elgunash, a journalist collaborating with the government critic and independent online media Meydan TV, against the ban prohibiting her from leaving the country. The Institute for Reporters’ Freedom and Safety (IRFS) received the news from Elchin Sadigov, the lawyer defending the journalist’s rights.

Founded in May 2013, Meydan TV is an internet-based television reporting on human rights abuses and government corruption. The TV channel is headquartered in Berlin, Germany, and cooperates with different journalists who are based in Baku. Aynur Elgunash also operates in Baku and collaborates with Meydan TV. Elgunash is under an unjustifiable travel ban, which prohibits her from leaving the country. In August 2015, Serious Crimes Investigation Department of Prosecutor General’s Office launched a criminal case in relation to Meydan TV’s activities under Articles 213.2.2 (evasion of taxes in a large amount), 192.2.2 (illegal business) and 308.2 (abuse of power) of the Criminal Code. Aynur Elgunash has testified in the case as a witness.

“On April 26, 2016, almost two months after the start of the court proceedings, Ali Babayev, the investigator of Serious Crimes Investigation Department of Prosecutor General’s Office, attended the hearing and said that the international travel ban on Aynur Elgunash had been imposed due to the necessity that had arisen in the course of the preliminary investigation of the criminal case #152006048 against the officials of Meydan TV internet media channel, which is investigated by the Serious Crimes Investigation Department of Prosecutor General’s Office of Azerbaijan Republic under Articles 192.2.2., 213.2.2., and 308.2 of Criminal Code of Azerbaijan Republic on the fact of causing significant damage to the state interests protected by law through illegal business activity which involved acquisition of large income and evasion of taxes through abuse of power. The necessity in question still remains. Taking this into account, the court refused to accept the complaint for consideration,” Sadigov said.

The lawyer stressed that the law does not provide for refusing to accept a supervisory complaint for consideration and that they have appealed this decision. In case of rejection of the appellate complaint, the lawyer said they would apply to the European Human Rights Court.

The Prosecutor General’s Office has not recognized the violation of the journalist’s right not to be subjected to torture and right of liberty enshrined in the European Convention on Human Rights, when it was ought to do so. Besides, the journalist’s right to freedom of movement provided by the national Constitution and the European Convention for the Protection of Human Rights and Fundamental Freedoms has been breached by the Prosecutor General’s Office. Under Paragraph III of Article 28 of the Constitution of Azerbaijan Republic, everyone legally being on the territory of the Azerbaijan Republic may travel without restrictions, choose the place of residence and travel abroad. According to Article 2 (1) of Protocol No.4 of the European Convention on Human Rights, everyone lawfully within the territory of a State shall, within that territory, have the right to liberty of movement and freedom to choose his residence. Article 2 (2) of the Protocol says that, everyone shall be free to leave any country, including his own.

Moreover, Article 155 of the Criminal Procedure Code specifies the grounds for application of restrictive measures. Restrictive measures such as arrest, house arrest, restraining order and so on may be applied only to the person, who is either a suspect or an accused in a criminal case. However, Aynur Elgunash has been interrogated as a witness and the law does not provide for applying a restrictive measure to the witness.