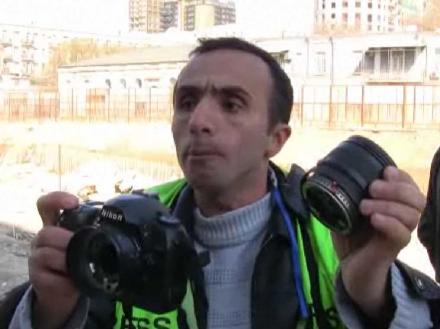 On September 14 Baku Appeals Court chaired by judge Mirpasha Huseynov held a hearing on the appeal filed by the Turan Information Agency correspondent Etimad Budagov against the decision of the Nasimi District Court, denying his request to invalidate April 27 decision of the inspector of Nasimi District Police Office #21, Shahin Ferhadov.
Inspector Shahin Ferhadov and employee of the prosecutor’s office Musa Hajiyev attended the hearing.

In his address, plaintiff Budagov expressed his dissatisfaction with April 27 decision of the inspector of Nasimi District Police Office #21, Shahin Ferhadov.  In turn, Ferhadov said that he conducted a fair and objective investigation into the case. Prosecutor’s office employee requested the court to uphold the original ruling.

Judge Mirpasha Huseynov rejected Budagov’s appeal, and upheld the decision of the court of first instance.

The journalist told the IRSF about his intention to appeal to the European Court of Human Rights.

Note that the decision of the first instance court was announced in the absence of Budagov and his lawyer.

Turan Information Agency correspondent Etimad Budagov was attacked and insulted by Baku Executive Power employee Zulfali Ismayilov and other employees of the executive power, while he was covering a protest of the citizens I connection with demolition of apartments on Shamsi Badalbayli street . The executive power employees cursed the journalist, repeatedly beating him on his face. His camera was seized and damaged beyond repair. The journalist filed an appeal with the court on August 15th 2012, considering the decision of the inspector of Nasimi District Police Office #21, Shahin Ferhadov.  His appeal was denied on September 3, 2012.