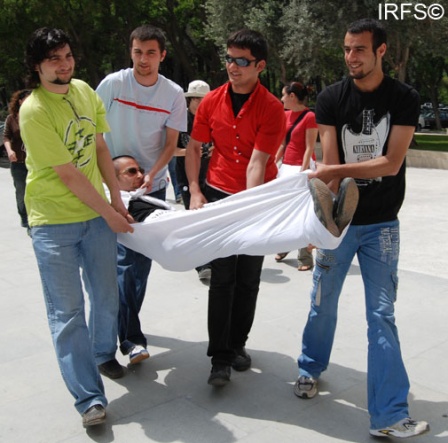 A young “Dalga” activist played Sakit’s wrapped-up symbolic corpse. Young people lay the symbolic corpse in the entrance door of Ombudsman Administration building.
The goal of the action was to direct the public attention to the situation of imprisoned journalist Sakit Zahidov and his serious health problems.
Ombudsman Administration department head Vugar Maharramov said they are constantly concerned about Zahidov; “We are constantly following-up on this issue. If he had any serious health problem he would have been moved to the treatment facility of the Penitentiary Service. Elchin Behbudov, who visited Prison #14 yesterday, didn’t say he has any health problems. Regarding your appeal, we’ll try to take a more active internet in his situation,” he emphasized.
The action conducted by the youth ended without any incident.
Photos from this action can be viewed here, and video here.

SALE OF SOME NEWSPAPERS BANNED