DEBATE HELD ON THEME OF “IS FREEDOM OF SPEECH RESTRICTED OR IS THERE LACK OF PROFESSIONALSIM?” 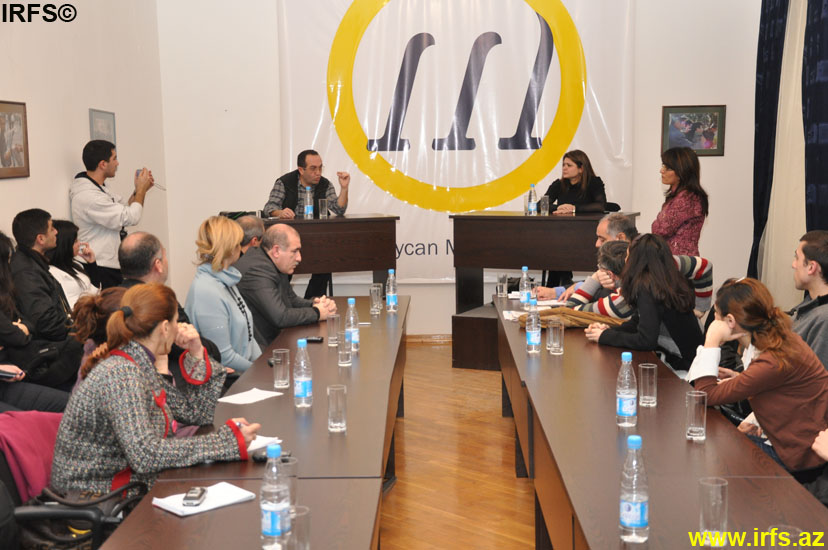 Today, 22 January, in the Azerbaijan Media Center, a debate on the theme of “Is freedom of speech restricted or is there a lack of professionalism” was held with the participation of Media Rights Institute Head Rashid Hajili and Democratic Reformists Youth Organization Chairwoman Vusala Huseynova. The debate was supported by “Yeni Nesil” Journalist Union and the US Embassy in Azerbaijan.
The moderator of the debate Ilhamiyya Rza asked the two participants a question: “Do you agree with the resolution issued by the European Union regarding the situation of freedom of speech in Azerbaijan?” Rashid Hajili said that this resolution was the result of long years of observations. Rashid Hajili noted that the beating and arrest of journalists, and pressure against them is obvious; and this makes the international organizations adopt negative decisions regarding Azerbaijan.
Vusala Huseynova said that the European Union adopted the resolution regarding Azerbaijan under the pressure by Armenian Diaspora. She emphasized that the silence of the European Union regarding Daglig (Nagorno) Garabag and adopting of a resolution regarding freedom of speech is a step taken with prejudice.
They then logged on to an internet connection with European Parliament member, Dutch Deputy Mariet Shaki to listen to his thoughts on the resolution.
The European Parliamentarian said that issues of Daglig (Nagorno) Garabag and freedom of speech are different from each other and that Azerbaijan did not adhere to its commitments in the area of freedom of speech.
After the web conference, Parliamentarian Panah Huseyn, “Yeni Nesil” Journalists Union Chairman Arif Aliyev, human rights defenders Irada Javadova and others expressed their opinions regarding the situation of press in Azerbaijan.