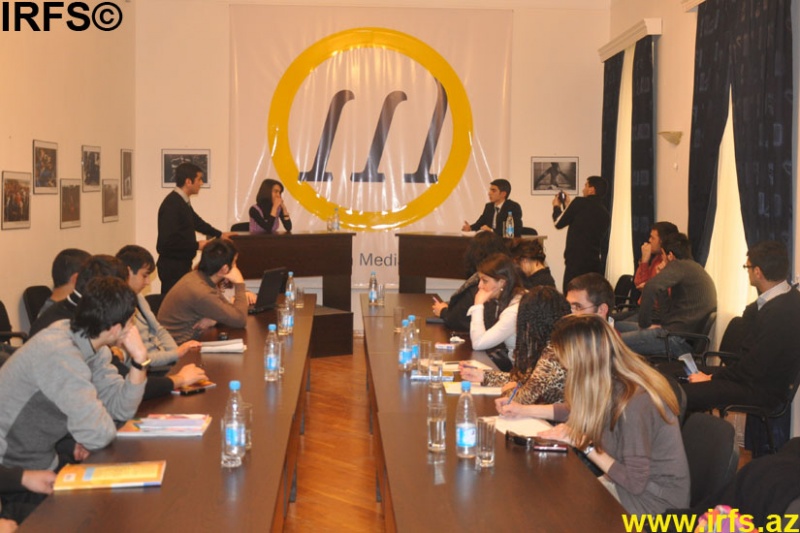 Today, 17 March, in the Azerbaijan Media Centre, a debate was held on the theme of “Are TV newscasters professional on the Azerbaijan TV channel?”  The debate was conducted among Baku State University Journalism faculty students.
One of the students claimed that the TV newscasters are not professional, other students objected to this statement. The professionalism level, principles used to hire people for the TV channels, the difference between newscasters and discussion moderators, the low number live broadcasting programs on TV channels among other subjects were touched upon in the discussions.

TV newscaster Ilhame Novruzova, who was invited to the debate as an expert, said that she agreed with the student who claimed that newscasters’ professionalism level is low and there are serious problems in this sector.

IRFS representative Rasul Jafarov said that they have been conducting the monitoring of eight nationwide TV channels since May of last year and evaluated the journalists’ professionalism on the basis of the results of monitoring. According to Jafarov, there are not professional TV newscasters to cover political figures and political themes in Azerbaijan. He talked about http://tv-radio.az/ website that was created in the framework of the project “Free Airwaves”, and about footages demonstrating non professionalism of the newscasters gathered in this website. Then Jafarov demonstrated several examples.

LAWSUIT OF PUBLIC UNION AGAINST JUSTICE MINISTRY NOT FULFILLED