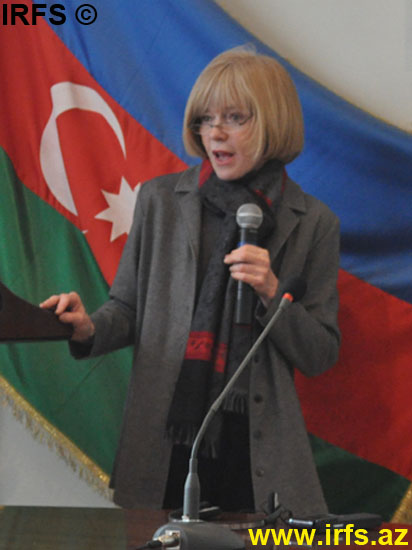 Today, 17 March, in the Academy of Justice, an event was held on the theme of “Judges, prosecutors, journalists and public’s right to access to information.”  Judges, employees of prosecutor’s office and journalists participated in the event, which was conducted by the US Justice Department Advisor Barbara Swann.
Swann said that journalists play a very important role in the democratic changes, and it is important that judges and prosecutors tend to cooperate with journalists. She talked about standards and experience in the US and other international countries. Then she touched upon issues such as obtaining information from prosecutor’s office organs and courts, the realization of TV broadcasting from court halls, legislative articles regulating this sector, and asked the participants about their opinions related to this issue.

Chief Prosecutor office representative Mahir Tagiyev said that the press service is operating at the Chief Prosecutor’s Office, a separate structure was created to take up this work, and the names and contact info of people responsible for relations with the press at different prosecutor’s office organs are defined and published in the media. Tagiyev added that there is a “hotline,” and journalists have the opportunity to get specific information by means of Chief Prosecutor’s Office’s website that operates 24 hours a day.

Voice of America radio Baku service Head Tapdig Farhadoglu assessed the lack of participation by media captains in the event negatively and said that their involvement in the event like this is very necessary. Farhadoglu noted that there has been certain development in obtaining information from prosecutor’s office organs recently, but couldn’t say the same about courts. He noted that it is difficult to work with this system because it is unknown who to address for information in the courts.

The issue of live broadcasting from court halls stirred discussions. Some judges and prosecutor’s office employees said that it is inadmissible; but other colleagues stated that some hearings require public where the live broadcasting becomes appropriate.