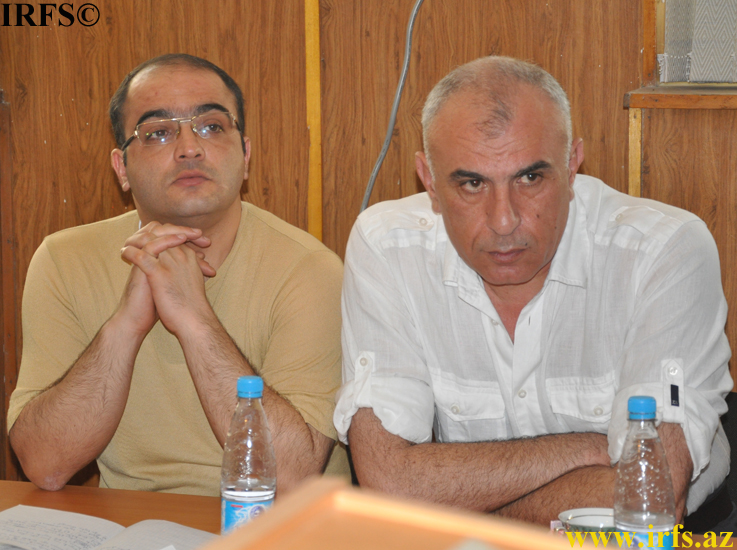 Today, 9 June, in the Garadag District Court, under the chairmanship of Judge Ismayil Khalilov, a hearing was held on the criminal case opened against the Editor-in-chief of Gundelik Azerbaijan and Realniy Azerbaijan Newspapers, Eynulla Fatullayev.
Eynulla Fatullayev clarified why he stopped the hunger-strike. He said that Baku Investigative Prison Chief Elkhan Sadigov and a high-ranking official of the Ministry of Justice visited him and told him that the President Ilham Aliyev is aware of the decision adopted by the European Court of Human Rights. Therefore he stopped the hunger-strike.
“When I asked about the reason of the failure to execute the decision, they told me that there is a month left to fulfill this decision,” said Fatullayev who then thanked his colleagues who appealed to the president to meet with him and recommended that they conduct an action regarding this.
Then Plaintiff Elchin Nagiyev spoke regarding the motions filed during previous hearings to hold monitoring in prison #12, to conduct an examination of his nail and hair samples, to interrogate anonymous people, and to release Eynulla Fatullayev. Nagiyev considered the motions unfounded and requested that they not be fulfilled.
The Judge issued a decision to fulfill the motion that regarding the conduction of monitoring in prison #12.
Expert Ofeliya Zerbeliyeva, who expressed her opinion regarding narcotics found in Fatullayev’s shoes and vest, was interrogated. Zerbeliyeva responded to Fatullayev`s question as to whether or not there was another substance in the content of the heroin found on him. She said that no other substance was revealed in the narcotics.
E.Fatullayev said that there are contradictions between the accounts given by O.Zerbeliyeva and previous experts. He said that there the previous experts claimed that they found amphetamine and psychotropic substances in addition to heroin.
E. Fatullayev asked for a two hours allowance during the next hearing to speak about the results of his journalistic investigations regarding the case of the murdered editor-in-chief of Monitor journal Elmar Huseynov.
The next hearing will be held on 16 June at 11:00 a.m. when monitoring will be held in prison #12.
The European Court of Human Rights issued a decision regarding the case of imprisoned Editor-in-chief of Gundelik Azerbaijan and Realniy Azerbaijan Newspapers Eynulla Fatullayev. The decision states that the journalist should be released immediately and the Azerbaijani government should pay 27,822 EUR to Fatullayev in compensation.
Eynulla Fatullayev was arrested in the court hall on 20 April 2007 under the decision adopted by the Yasamal District Court on the lawsuit of Refugee/IDP Rights Defense Committee Chairperson Tatyana Chaladze.
After his arrest, a criminal case was opened against Eynulla Fatullayev in the National Security Ministry Chief Investigative Office regarding an article published in Realniy Azerbaijan newspaper, which according to the Ministry of Foreign Affairs, caused foreign citizens and representatives of international organs safety concerns. He was convicted under articles 214.1 (threatening terror), 283.2.2 (incitement of ethnic/national, social or religious hatred abusing authority) of the Criminal Code and was sentenced to pre-trial detention. Eynulla Fatullayev was then convicted under 213.2.2 (tax evasion).
Eynulla Fatullayev was sentenced to 8.5 years of imprisonment on 30 October 2007 under the decision adopted by the Grave Crimes Court and was fined in the amount of 242 thousand 522 AZN.
On 29 December, 0.223 grams heroin was found on Fatullayev. Eynulla Fatullayev and his lawyer assess this incident as an operation set-up to prevent the decision of the European Court of Human Rights (ECHR) regarding the journalist in the near future. A criminal case was opened against Fatullayev in the Garadag District Investigative Department under article 234.1 of the Criminal Code (Illegal purchase or storage without a purpose of selling of narcotics or psychotropic substances in an amount exceeding necessary limit for personal consumption) and he was transferred to the Baku Investigative Prison #2 on 2 January. The investigation into the case was concluded and it is being considered in the Garadag District Court.
Realniy Azerbaijan has been published as weekly newspaper, and Gundelik Azerbaijan was published as a daily newspaper since 2005. Eynulla Fatullayev established the newspapers and was the editor-in-chief of both publications. The newspapers ceased their activity after the arrest of the editor-in-chief in 2007.
Previous Post

KUR FLOODED BECAUSE OF DELTAS BUILD UP DEPOSITS