EDITOR-IN-CHIEF’S MOTION TO THROW OUT LAWSUIT NOT FULFILLED 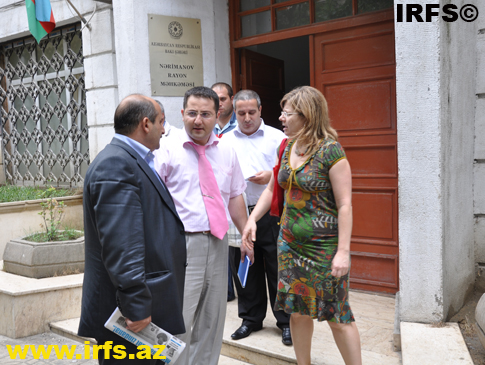 Today, 13 August, in the Narimanov District Court, under the chairmanship of Judge Arif Ismayilov, a hearing was held on the special lawsuit of Human Rights Defender Chingiz Ganizade against “Milletim” Newspaper Editor-in-chief Faramaz Novruzoglu (Allahverdiyev).
Special Plaintiff Chingiz Ganizade and his representative Ragif Mustafayev, and Faramaz Novruzoglu and his lawyer Imran Karimov on behalf of the defendant participated in the hearing.
F.Novruzoglu filed a motion to throw out the lawsuit claiming that the lawsuit in the special format was not composed in accordance with the Criminal Code of Azerbaijan Republic. The judge did not fulfill the motion. Then F.Novruzoglu asked the judge to give him time to submit evidence in connection with the case to the court.
The judge scheduled the next hearing for 17 August at 9:30 a.m.
Human rights defender Chingiz Ganizade filed a lawsuit under articles 147.2 (accusing someone in grave or especially grave crimes) and 148 (insult) of the Criminal Code in the special format against F.Novruzoglu due to series of articles in “Milletim” newspaper by F.Novruzoglu about criminal cases in prisons and concealing of these cases by human rights defenders.
Previous Post