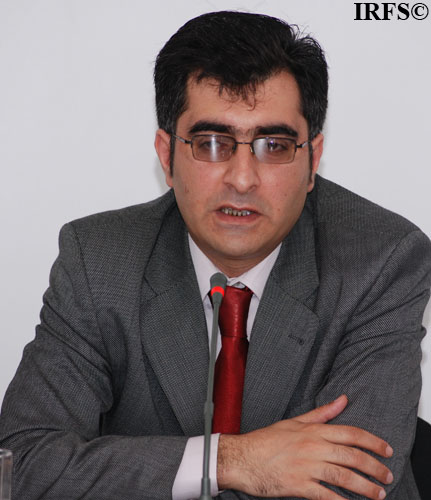 “The closure of the center is directly connected with the 15 October presidential elections. We have right to freedom of association.

Utilizing this right we’ll continue our work with or without registration,” said Election Monitoring Center (EMC) Chairman Anar Mammadli during a press conference about the invalidation of EMC's registration held in the press office of the Institute for Reporters’ Freedom and Safety today.  Mammadli said the EMC was founded in 2001 and he appealed to the Justice Ministry several times for registration. However the center was only registered on 1 February of this year. “The Justice Ministry filed 3 lawsuits on 17 April 2008 asked the court to invalidate EMC's registration and cease the NGO's operations on these grounds; that the organization gave incorrect information about its founders and legal address and opened eight branches (offices) in Azerbaijani regions without informing the Justice Ministry,” said Mammedli. “Let me note that up to now the Justice Ministry hasn’t objected to anything about the documents or work of EMC,” he added. Azerbaijani Lawyers Association Chairman Annagi Hajibeyli said in the event that the Justice Ministry’s lawsuits against EMC were groundless. “The first lawsuit is completely groundless,” said Hajibeyli. “If the information about the organization’s founder was not clear EMC should have never been given registration. Regarding the second lawsuit, about the change of legal address, this can’t be a significant law violation. In the event of such a violation the Justice Ministry should have given EMC a warning. The third lawsuit is totally the Justice Ministry’s fault. It is shown in the law that at least 2 warnings must be made when any kind of violation occurs. In addition, to adopt a verdict that is immediate execution is illegitimate. It is also shown in the law this is only acceptable in exceptional cases.” IRFS Chairman Emin Huseynov said, “Our organization is engaged in speech freedom. This trial was intriguing for us as well. We participated in the hearing. We video recorded the hearing as best we could and wrote the audio stenogram.  We are interested in this case because EMC is an alternative information source for us about elections and the results of elections. This organization will be considered a formal information source if it has official registration. Its registration was annulled. Several mass media means will be deprived of official information about the elections. That is why we are involved in this case.”  The National Democratic Institute has disseminated a statement about EMC’s closure. You can view this statement at http://www.accessdemocracy.org/library/2315_az_release_court_051408.pdf .And an appeal from EMC can be viewed online here: Photos from today’s press conference can be viewed here http://www.irfs.az/component/option,com_datsogallery/Itemid,30/func,viewcategory/catid,53/.  Video from today’s press conference can be viewed http://www.youtube.com/watch?v=gREbdzBRvWI  .

INTERNATIONAL MEDIA SUPPORT TO CREATE CENTER FOR JOURNALISM IN AZERBAIJAN