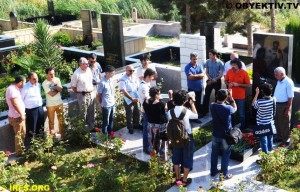 Azerbaijan and international civil society came together on Wednesday to pay homage to slain journalist Elmar Huseynov, a man they remembered as insanely brave journalist and citizen who cared deeply about the fate of his country. As such, on the occasion of Huseynov’s 46th birthday a group visited his grave at the Alley of Honor (a public cemetery and memorial in Baku).

Elmar Huseynov, the  editor-in-chief of the magazine Monitor  was shot dead in a contract-style in the in the stairwell of his apartment building in Baku on March 2, 2005.

Though Huseynov’s death had profound international resonance, there has been relatively little reaction inside Aliyev’s Azerbaijan. More than eight years later, the authorities have failed to adequately investigate this case and no one has been brought to justice for the attack.

Nonetheless, Azerbaijani right groups and media continue to campaign against impunity and to fight the crackdown on press freedom that has plagued Azerbaijan.

Visiting his grave on Wednesday, colleagues and friends said they would continue to campaign against impunity and to fight the crackdown on press freedom that has plagued Azerbaijan.  We will continue our efforts to ensure the murder of Elmar Huseynov is resolved and all guilty parties are punished in accordance with the law,  his colleagues said.

The commemoration event is a reminder that Huseynov’s work remains alive in Azerbaijani journalistic and political life.

Elmar Huseynov’s father Sabir Huseynov, who also attended the memorial, said he was proud to see that his son is remembered by younger generation. ‘It shows that he lives in minds and hearts forever” he said.

Background: Chief Editor of the Monitor magazine, Elmar Huseynov was murdered by an unknown assailant in front of his house who shot him seven times. Soon after Azerbaijani authorities declared that the crime was committed by Teymuraz Aliyev and Tahir Khubanov, ethnic Azerbaijanis living in Georgia. However the Georgian side refused to deliver the above-mentioned persons, claiming that there is no evidence proving their guilt.