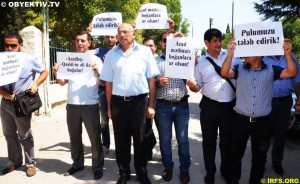 Azadliq newspaper staff is demanding that Gasid Press Distribution Company repay its debt. The journalists held a protest in front of the Gasid office  under the slogans like “We demand our money” and “Shame on those who stifle free press”. They said Gasid owes the newspaper 45,000 AZN (approximately same amount in EUR) from sales. “They paid us only a tiny portion of the debt”, comments Azadliq newspaper editor Rahim Hajiyev.

“Our negotiations with Gasid leadership have  not brought any result. Gasid is owned by the government and it goes without saying and the government’s anti-Azadliq policy  has an obvious influence on Gasid’s decision”, he said.
If the Azerbaijani government had a will, this problem would have been solved long ago, believes Hajiyev.
Gasid’s payments to  other clients have not been delayed, he said.
According to Hajiyev Azadliq is ordered to pay 62,000 AZN fine while a 100,000 AZN claim has been lodged against the newspaper by the Ministry of Defense.
“As a result of Gasid’s failure to pay our money, we have become indebted to the publishing company to the amount of 20,000 AZN and have already received a warning from them that Azadliq’s publication will be ceased if we do not pay the debt” said Hajiyev.

“You know, Gasid’s owner is one of the leading figures of the ruling Yeni Azerbaijan Party and his company is under state control. We have been demanding our money for more than a year, but this problem is still unsolved. The purpose is to stifle and silence our newspaper’s activity” said Chobanoglu.

“But we still owe 39,196 AZN to Azadliq and we admit it. But due to the seasonal fall in the newspaper sales we have encountered the known problem. That is why we plan to pay it off gradually commencing September” Ismayilov noted.

Rahim Hajiyev said they will appeal to the court unless their problem is solved.