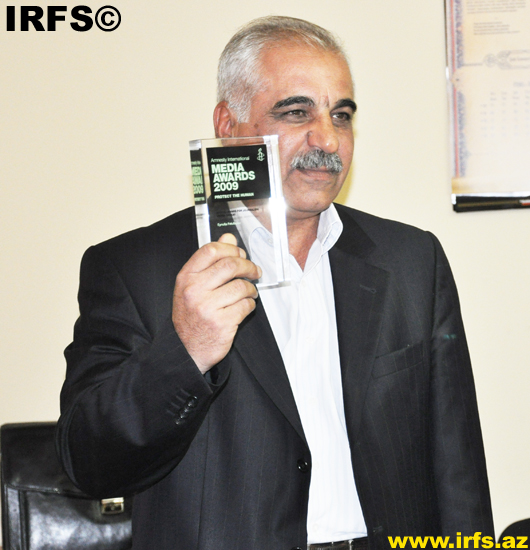 Today, 2 October, in the Baku Journalism School, the Amnesty International award given to imprisoned Editor-in-chief of “Gundalik Azerbaijan” and “Realniy Azerbaijan” newspapers Eynulla Fatullayev was presented to the journalist’s family.
Representatives of Helsinki Citizens' Assembly Azerbaijan National Committee, the Institute for Reporters’ Freedom and Safety, Media Rights Institute, heads of other organizations, representatives of diplomatic corps, politicians, lawyers, and media representatives participated in the event.
Helsinki Citizens' Assembly Azerbaijan National Committee Head Arzu Abdullayeva said that this award that is being given to Eynulla Fatullayev by the Amnesty International will be the reason for his release and she presented the award to his father Emin Fatullayev.
APFP Chairman Ali Karimli, parliamentarian Panah Huseyn, Fatullayev’s lawyer Isakhan Ashurov and others expressed their positive opinions about the award and said that they hope that Eynulla Fatullayev will be released soon.
On 2 June Amnesty International gave its coveted 'Special Award For Journalism Under Threat' to imprisoned Editor-in-chief of “Gundalik Azerbaijan” and “Realniy Azerbaijan” newspapers Eynulla Fətullayev.  The award was presented by Amnesty International UK Director Kate Allen and was accepted on Eynulla's behalf by John Mulholland, editor of The Observer newspaper, at a ceremony at the British Film Institute in London.

JOURNALIST NOT ALLOWED IN NAKHCHIVAN