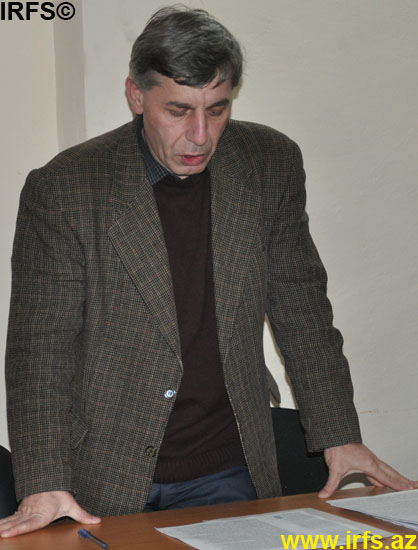 Today, 3 February, in the Yasamal District Court, under the chairmanship of Judge Khagani Tagiyev, a hearing was held on the special format lawsuit of Internal Minister Ramil Usubov against Femida 007 Newspaper Editor-in-chief Eyyub Karimov.
The plaintiff’s Representatives Dabuleyka Guliyev and Alirza Habilov, and the defendant, Eyyub Karimov, participated in the hearing.
In his final statement, Karimov said that he used criticism, not insult or libel in his articles. “I put my personal thoughts in these articles and it is unacceptable to be indicted for my views,” said E.Karimov.
Plaintiff’s Representative Dabuleyka Guliyev said that they did not want the defendant to be imprisoned, but to be sentenced to two years corrective labor.
After returning from deliberation, Judge Khagani Tagiyev announced the verdict, according to which Eyyub Karimov was sentenced to 1.5 years corrective labor and has to pay 15% of his salary to the government.
E.Karimov told the Institute for Reporters` Freedom and Safety that he considers the verdict biased and will file an appeal against it.
Interior Minister Ramil Usubov filed a lawsuit against Eyyub Karimov under article 147.2 of the Criminal Code due to articles “Letter fancier,” and “NSM and Chief Prosecutor’s Office know well who ordered it,” which were published in Femida-007 newspaper; and “Internal Ministry inside and outside of the game” published in Azadlig newspaper.
Photo:

US MISSION TO OSCE CONCERNED REGARDING IMPRISONMENT OF JOURNALISTS