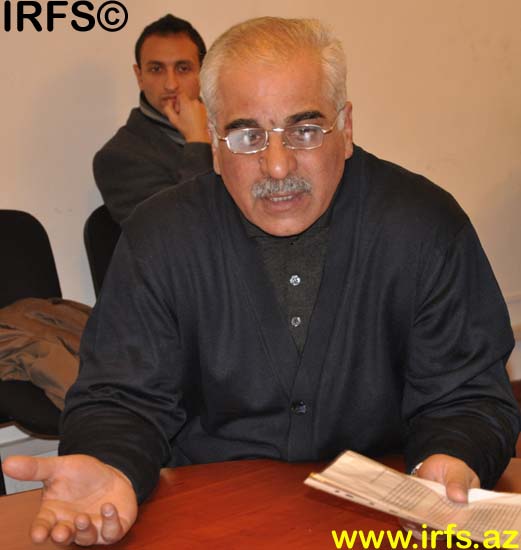 Today, 17 March, the family of imprisoned Editor-in-chief Gundelik Azerbaijan and Realniy Azerbaijan Newspapers Eynulla Fatullayev was threatened by unidentified people.
The Institute for Reporters` Freedom and Safety was told this by Emin Fatullayev.

Emin Fatullayev said that an unidentified person called them. “The person did not introduce himself, he threatened me and said my son and I should not speak much or things might turn bad for us. The person added that my son and family are in danger and we will be destroyed,” said Emin Fatullayev.

Fatullayev added that he informed police of the phone call via 102 phone number, “After 10 minutes, the employees of the Yasamal District Police Office #26 came and demanded that I write an appeal regarding this incident and said that they will investigate this issue”.

The Yasamal District Police Office #26 told Radio Liberty that resident Emin Fatullayev appealed to the police department in the written form regarding the threatening calls and his appeal is being investigated.

Gundelik Azerbaijan and Realniy Azerbaijan newspapers’ editor-in-chief Eynulla Fatullayev, who is being held in the Baku Investigative Prison, released a statement claiming that late journalist Elmar Huseynov’s murder was organized by high-ranking NSM official Akif Chovdarov, and that Chovdarov himself admitted this to Fatullayev.

Eynulla Fatullayev was sentenced to 2.5 years of imprisonment on 21 April 2007 for insulting honor and dignity.  Later he was convicted under articles 214.1 (threatening terror), 283.2.2 (incitement of ethnic/national, social or religious hatred abusing authority), and 213.2.2 (tax evasion) of the Criminal Code and was sentenced to 8.5 years of imprisonment on 30 October 2007. Prior to the new charge against him, Fatullayev was serving his sentence in prison #12. On 29 December, 0.223 grams heroin was found on Fatullayev. Eynulla Fatullayev and his lawyer assess this incident as an operation set-up to prevent the decision of the European Court of Human Rights (ECHR) regarding the journalist in the near future. A criminal case was opened against Fatullayev in the Garadag District Investigative Department under article 234.1 of the Criminal Code (Illegal purchase or storage without a purpose of selling of narcotics or psychotropic substances in a quantity (amount) exceeding necessary for personal consumption) and he was transferred to the Baku Investigative Prison #2 on 2 January.
Realniy Azerbaijan has been published as weekly newspaper, and Gundelik Azerbaijan was published as a daily newspaper since 2005. Eynulla Fatullayev established the newspapers and was the editor-in-chief of both publications. The newspapers ceased their activity after the arrest of the editor-in-chief in 2007.