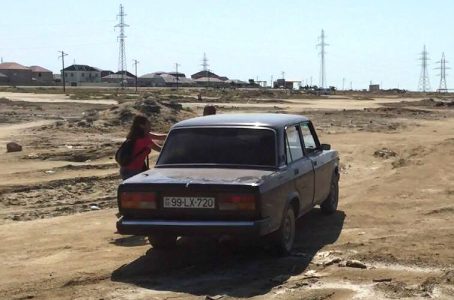 Journalist Aytaj Ahmadova was assaulted by an unidentified person while filming the demolition of business facilities belonging to internally displaced persons who live near the Salty Lake. The assailant, who was in civilian clothing, robbed her of her mobile phone and ran away. “There were policemen nearby, but they did not interfere. We had arrived there to film the IDPs’ business facilities being demolished. At that moment, a man wearing civilian clothes approached me from behind, seized my phone and ran. I ran after him crying out, but couldn’t recover my phone. He went and got into a car. Twenty minutes later a representative of Surakhani District Executive Power returned by phone. At around 10.10, a fight broke out between the representatives of local executive power and owners of the demolished facilities. The executive power representatives were using force against the IDPs. When I was filming the scene, the same person suddenly grabbed the camera and tripod from me. He then got into a car and drove away,” Ahmadova said.

Aytaj Ahmadova says she presented her journalistic ID when filming the incident. “However, they did not allow filming. I am going to appeal to the police and other relevant agencies in this connection. We have images of the car of the person who stole the technical equipment. I hope that the police will investigate the case objectively and return my items,” the journalist added.

According to Ahmadova, the robber escaped from the area in a VAZ 2107 brand car, with the number plate 99LX720.

Aziz Orujov Meets with His Family

Journalist tortured after he wouldn’t apologize