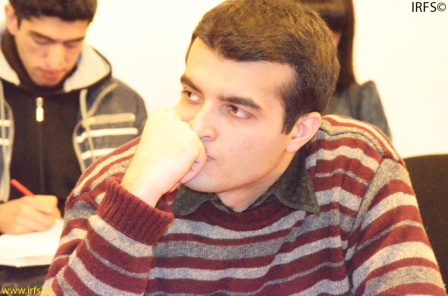 The “Free Music in a Non-free Country” Sing for Democracy campaign launched by local civil society activists is gaining national and international support.
The purpose of the campaign is to raise awareness of the human rights problems in Azerbaijan during the run-up to the Eurovision 2012 song contest, said the initiators of the campaign at a press conference at the Institute of Reporters’ Freedom and Safety (IRFS).
The Coordinator of the Alliance for Protection of Political Freedoms Anar Mammadli reported that the campaign is being supported by Reporters without Borders (RSF), an international organization to protect journalists. The founders intend to appeal to French President Nicolas Sarkozy, asking him to raise the issue of human rights problems in Azerbaijan during his visit to Baku in early October.
Democratic institutions in Czech Republic, Poland, Netherlands, France, Norway, and Germany are also interested in the campaign. The campaign will also raise awareness of human rights defenders persecuted by authorities.
Human Rights Club Coordinator Rasul Jafarov said that a dedicated website and video clip on human rights will soon be available. The activists will collect signatures for a petition in defense of human rights.
The initiators of the campaign are also suing Public Television for refusing to respond to their information inquiry. The case will be considered by the Yasamal District Court on September 26.
Civil society activists consider that Azerbaijan’s place in Europe will remain in question for as long as citizens are persecuted on political motives, and freedom of assembly is restricted and protesters are arrested.
“Free music in non-free country” was initiated by Peace and Democracy Institute, Institute for Reporters’ Freedom and Safety, Human Rights Club and Alliance for Protection of Political Freedoms.  Nida Civil Movement, “Free Youth” organization,  and the Democratic Journalism  School also joined the campaign later on.

JOURNALIST APPEALS TO PRESIDENT FOR HIS FAMILY’S SAFETY