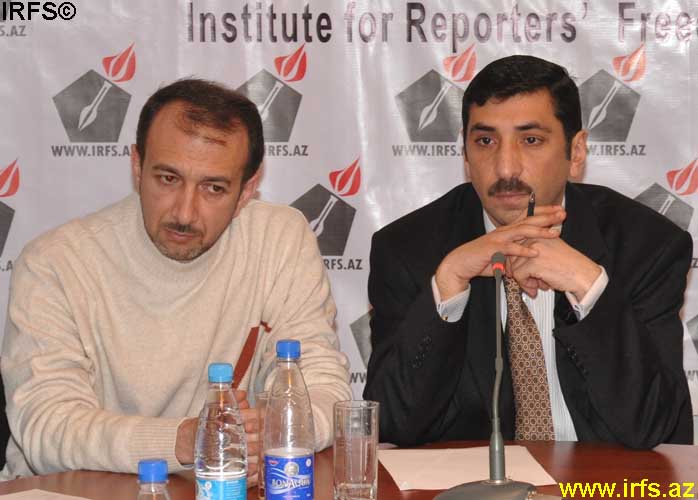 Today, 11 March, in the press center of the Institute for Reporters' Freedom and Safety, the Free Speech Revolutionaries (FSR) club conducted an event in connection with changes to articles 32 and 50 of the Constitution concerning press which will take place on 18 March referendum and changes to article 19 of the Law on Mass Media that had been realized a little while ago.
FSR Club Founder Eldaniz Elgun spoke first and said that there has been stagnation in Azerbaijan’s political life in recent years, and only the press has been reacting to it.
Then “Khural” Newspaper Editor-in-Chief Avaz Zeynalli spoke. He said that as a press organ he has responded to the changes and amendments to the Law on Mass Media long ago. The changes to take place on 18 March Referendum are aimed at destroying independent media in Azerbaijan.
“Yeni Musavat” columnist Mahal Ismayiloglu said that the changes to articles 32 and 50 of the Constitution will be tested on well-known newspapers after the Referendum. As difficult as the journalist profession was, it will be more difficult from now on.
Head of the “Democratic Journalists League” Yadigar Mammadli expressed his opinion regarding this issue.  The changes considered to the Constitution and changes to article 19 of the Law on Mass Media are a step backward, added Mammadli.
Media Rights Institute Director Rashid Hajili said that the changes should not be fearful in a country where there is democracy and political democracy. According to Rashid Hajili, the Press Council has ordered these changes to the law. “There main desire is to have authority. Consequently, these changes harm serious press,” added Hajili.
Photo:http://www.irfs.az/component/option,com_datsogallery/Itemid,30/func,viewcategory/catid,205/lang,az/
Previous Post