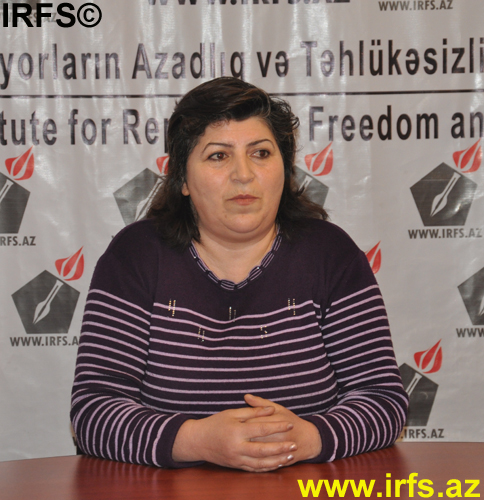 Today, 1 April, in the press center of the Institute for Reporters` Freedom and Safety, Gadabay district resident Sariyeva Elminaz Eldar gizi conducted a press conference regarding the violation of her rights.
E.Sariyeva said that she worked as an engineer at the Electricity Network of Gadabay district; she was dismissed from work without any reason, and her complaints fell on deaf ears. Having noted that she complained to the Ministry of Labor and Social Security of Population, E.Sariyeva stressed that she was insulted by the employees of this ministry. She then appealed to the Gadabay District Court.
“Despite facts that I know plus my witnesses, the courts did not adopt any decision in my favor,” said E.Sariyeva. “I took custody of my niece, and she was deprived of targeted social aid. Later Gadabay District Inspector on Targeted Social Aid Ziyad Jalilov said that I had to give half of the money to them if I wanted to receive this aid.”
E.Sariyeva noted that she did not agree to this and faced pressure as a result. On 10 February she wanted to be registered for a reception at the Presidential Administration when police employees told her that she was under search warrant and took her to the Sabail District Police Unit 9. “They beat me and took my gold necklace and ring,” said Sariyeva. “They haven’t returned these to me.”
E.Sariyeva added that she was handed to the Gadabay district Police Department. Then she was asked to give a written statement that she would not leave the area of the region, and consequently she did not have the ability to complain.
Sariyeva said that she appealed to the Gadabay District Court regarding these incidents, but the case has not been considered yet.