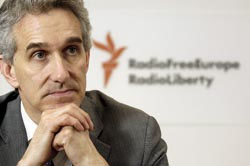 He said that his main concern is about pressure and threats that happen against the journalists that write the truth. “There’s place and certain pluralism for the media in Azerbaijan, but total independent press hasn’t been formed yet,” he said.
Gedmin said that he didn’t talk about a concrete journalist in his meeting with the president, but discussed the overall physical security of the journalists. An official in the Presidential Administration stated that some journalists are not professional and responsible. In response to this, Gedmin stated that irregardless of their professionalism and responsibility, the journalists shouldn’t be punished for what they write.
In the end, Gedmin emphasized that his and the president’s opinions didn’t coincide. “The president doesn’t share my opinions. However, this is not solely my position; this position is supported in Washingtoon, Brussel and Strasburg mostly,” he added.