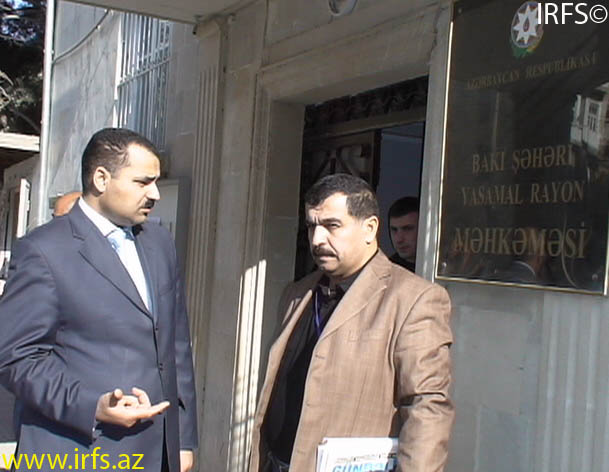 Today, 18 November, in the Yasamal District Court, under the chairmanship of Judge Abbas Rzayev, a preliminary hearing was held on the lawsuit of the Defense Ministry Beylegan Military Unit Commander, General-major Mahmud Hamzayev against "Gundalik Baki" Newspaper Editor-in-chief Habil Aliyev, assistant editor-in-chief Uzeyir Jafarov, officers in reserve Arif Rahimov and Telman Abilov under article 147.2 of the Criminal Code in the form of special accusation.
During the hearing Valiyev reminded that a little while ago Hamzayev appealed to the court with the same lawsuit and the court rejected it. Valiyev said that filing the same lawsuit was disrespect for the court. Noting that Hamzayev provided false information on purpose, editor-in-chief demanded that a decision be issued to bring him to responsibility.
Other defendants, claiming that the lawsuit was unfounded and it was the repetition of the previous lawsuit, demanded that the lawsuit not be accepted for consideration. The defendants presented the court with the copy of Hamzayev’s first lawsuit and the court decision on the lawsuit issued on 17 October 2008.
Then the representative of the special accuser Eyvaz Mammadli stated that the first lawsuit was not fully substantiated, but current lawsuit is. Therefore he demanded that the lawsuit be taken for consideration. He noted that they withdrew the lawsuit filed against Habil Valiyev and Telman Abilov. However, Valiyev and Abilov stated that they did not need any compassion.
In the end judge Rzayev postponed the hearing until 20 November 11:00 a.m. to investigate the evidence presented to court.
Previous Post