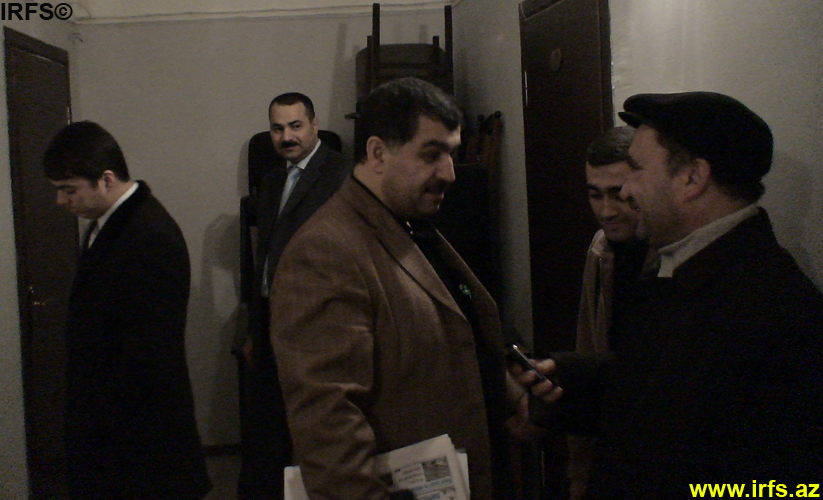 Today, 12 December, a preliminary hearing on the lawsuit of Assistant Director of School #21 Zohra Yusubova against “Gundalik Baki” Newspaper was held in the Yasamal District Court, under the chairmanship of Khagani Mammadov.
Bakikhan Yusifov was the authorized representative of the plaintiff. “Gundalik Baki” Newspaper founder and Editor-in-chief Habil Valiyev and assistant Editor-in-Chief Uzeyir Jafarov participated in the hearing as the defendant party.
U. Jafarov spoke during the process and said that the Assistant Director of School #21 Zohra Yusubova sent a letter to the Press Council in which “Gundalik Baki” Newspaper employees have been insulted. Uzeyir Jafarov noted that “Gundalik Baki” Newspaper is plaintiff because of this issue and presented a counter claim to the court.
The judge, claiming that the lawsuit was not signed by U. Jafarov, did not accept the counter claim. He said that although U. Jafarov represents “Gundalik Baki” Newspaper through power of attorney, it document of this power of attorney arrangement was not composed according to Civil Procedural Code Item 74. Then U. Jafarov put forth a motion to postpone the preliminary hearing so they could fix the faults noted by the judge.
Then the judge postponed the hearing until 25 December 3:00 p.m. The next hearing will be held closed.
This lawsuit stems from the article entitled "5th grader raped," which was published on 7 November 2008 issue # 203 (274) of “Gundalik Azerbaijan” newspaper. It was stated in the article that fifth grader was raped in school #21 and the school leader ship concealed this fact. Assistant Director of School #21 Zohra Yusubova appealed to court claiming that the article is degrading to honor and dignity and damaging to business image.
In the original lawsuit, the plaintiff demands that the newspaper be closed, that the editorial pay 10,000 for moral damages, and that the author of the article, pay a 15,000 AZN fine."
Previous Post