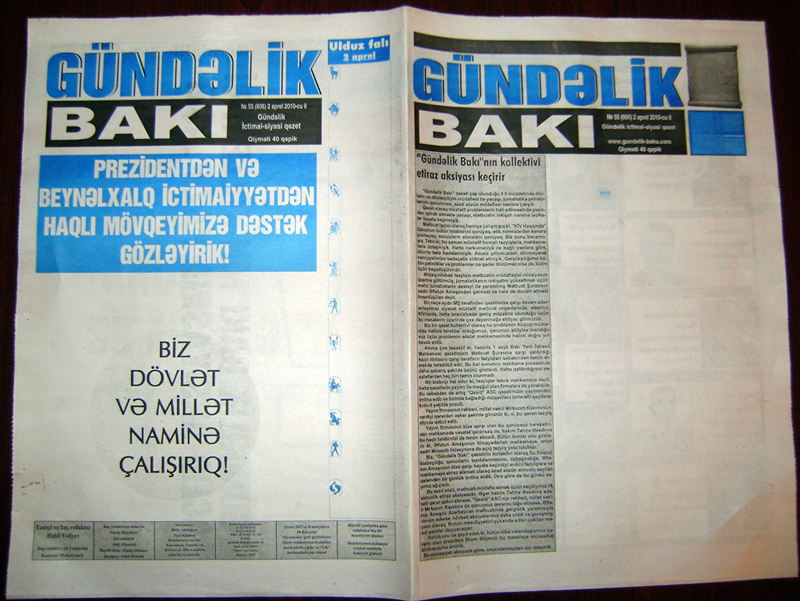 Today, 2 April, Gundalik Baki newspaper has been published without articles because it was announced as a racketeering press by the Press Council and as a result, “Gasid” Open Shareholder Society refused to disseminate the newspaper.
The first page runs information about the action, the second page is dedicated to the opinions of the newspapers’ employees, and the following pages reflect slogans that protest the action.
According to a statement made by Gundalik Baki newspaper during a hearing held on the lawsuit of Gundalik Baki newspaper against Press Council Chairman Aflatun Amashov, the newspaper’s motion to end this unfounded action of the distribution firm was not fulfilled. The newspaper’s staff assessed this as pressure of the Press Council against the court and distribution firm.
The statement stressed that more serious actions will be held on a large scale.
IRFS attempted to talk to the Press Council and Gasid OSS; however, this was not possible.
Press Council Head Aflatun Amashov talked to Mediaforum website today. He said, “On 1 February we addressed a letter to ‘Gasid’ Open Shareholder Society, ‘Kaspi Press Distribution’ LTD, ‘Azermetbuatyayimi’ Open Shareholder Society,’Metro-Service’ LTD and “Gaya” Press Distribution and requested information regarding media outlets included on ‘the black list’ of the Council; their circulation in 2009, the number of copies submitted by the media outlets, and the sales records. The Council’s ‘black list’ was added to the letter.”
On 30 December, 2009 the Press Council issued a decision to include Gundalik Baki newspaper on list of “racketeering press”. The newspaper leadership filed a lawsuit seeking for a publication of a refutation regarding the decision and to pay 100.000 AZN for moral damages and 50.000 AZN for material damages.
Gundalik Baki daily has been published since 2007.
Previous Post

OMBUDSMAN SAYS SHE SUPPORTS ADOPTION OF LAW “ON DEFAMATION”