OMBUDSMAN SAYS SHE SUPPORTS ADOPTION OF LAW “ON DEFAMATION” 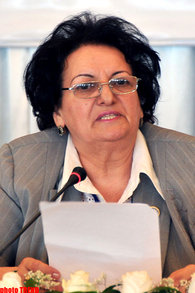 Today, 2 April, during a meeting of Milli Mejlis (Parliament), Ombudsman Elmira Suleymanova said that she supports adopting the “Law On Defamation” when she submitted the report on the results of 2009, according to Mediaforum website.
“Protecting honor, dignity and business image in addition to respect for freedom of speech and thought, and creating conditions for healthy and founded criticism are considered the most important duties of any government that reflects democratic values,” said the Ombudsman.
Milli Mejlis First Deputy Chairperson Ziyafat Asgarov objected to this. “This law has not been adopted in several countries of Europe,” said Asgarov. “Then why should we discuss this draft law? People demanding for the adoption of this law are interested in chaos in our country.”