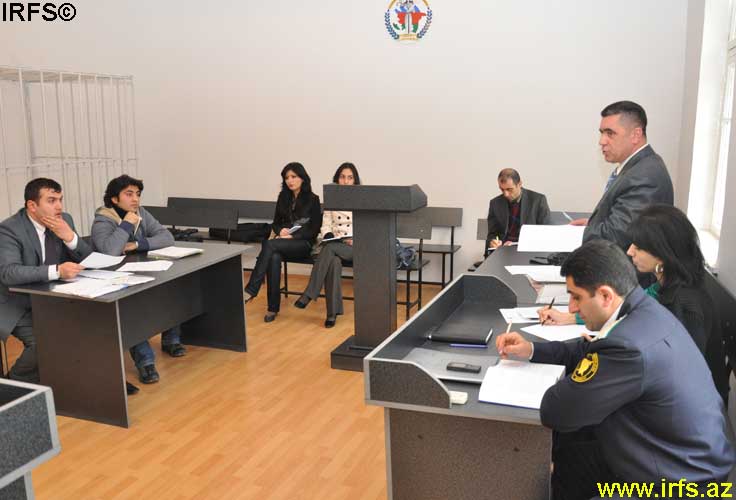 Today, 30 March, in the Nasimi District Court, under the chairmanship of Judge Ikram Shirinov, a court hearing was held on the lawsuit (for being subjected to police pressure) of the Institute for Reporters' Freedom and Safety Chairman Emin Huseynov against the Ministry of Interior, Nasimi District Police Department and Police Unit 22 of the Nasimi District Police Department.
Plaintiff Emin Huseynov, his lawyer Elchin Sadigov and the lawyer of Nasimi District Police Department and Police Unit 22 of the Nasimi District Police Department Mazahir Shahbarov participated in the hearing.
Photography was permitted briefly during the hearing, however filming was forbidden.
The hearing was opened with questions from Mazahir Shahbarov. Then the plaintiff’s lawyer put forth a motion about calling Orkhan Akhundzade to the court, bringing the person leading the operation to the court, and showing video footage from the site of the incident. The last motion of the lawyer was to receive Emin Huseynov’s phone conversations on 14 June 2008 from mobile operator; however, the judge did not fulfill any of the motions. The opposite side objected to the lawsuit. At that point the working day ended and witnesses were not interrogated.
Judge Shirinov scheduled the next hearing for 10 April at 10:00 a.m.
On 14 June, a group of fans of Cuban revolutionary Ernesto Che Guevera was trying to conduct an event in "Alaturka" restaurant when the employees of law enforcement organs interfered. IRFS Chairman Emin Huseynov, who was there observing and filming the event, was beaten by police in the Police Department 22. Emin Huseynov, who lost his consciousness due to police pressure and received treatment for more than twenty days in the hospital.