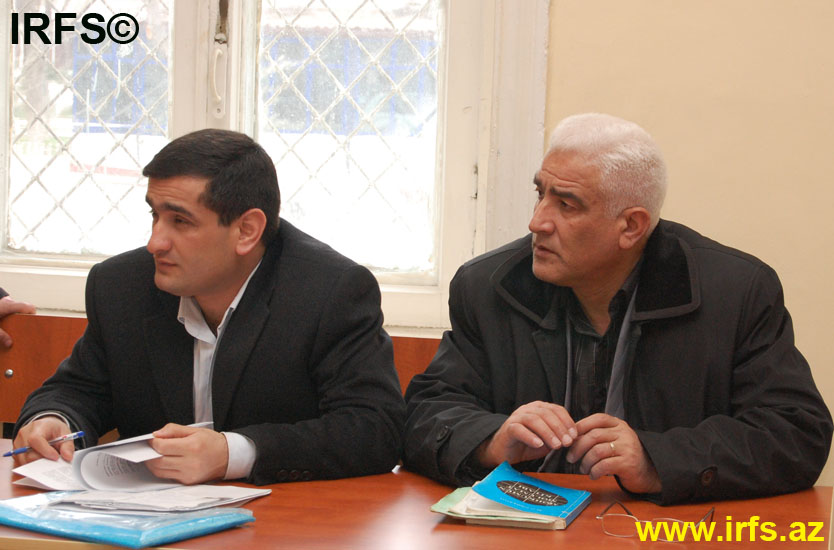 Today, 30 March, in the Sabail District Court, under the chairmanship of Judge Elnur Hasanov, a hearing was held on the lawsuit of "Mukhalifat" Newspaper Editor-in-Chief Rovshan Kabirli and the newspaper's Department Editor Yashar Agazade against the Ministry of Justice, Ministry of Justice's Penitentiary Services and Penitentiary Services' Investigative Detention Center #1 (Bayil Prison) to consider imprisonment conditions unfounded.
Deputy Chief of Investigative Detention Center #1 Agammad Mammadov filed a motion saying that the journalists appealed to court a year after they were released and therefore the lawsuit is unfounded and asked the judge to take these into consideration when adopting a decision.
The plaintiff Yashar Agazade said that beddings were not changed when they were held Investigative Detention Center #1, food ratio was less that indicated by law, sometimes they were not given food, and they were held in very small cells. Yashar Agazade noted that they weren’t given food although they were supposed to be given dry food when they were taken to courts and he had to stay hungry because another prisoner signed in the journal for food instead of him. His signature is not there, added Agazade.
“Media Rights Institute” Chairman Rashid Hajili, who was invited as a witness, said that he was allowed to visit the journalists as their defense lawyer; but the written papers the journalists wanted to give him were taken twice by prison guards and the guards entered the meeting room when he and the journalists were talking about prison conditions.
Judge E. Hasanov scheduled the next hearing for 2 April at 4:00 p.m.
The plaintiff added to the lawsuit the demand for 40 000 AZN for moral damages.
Mukhalifat" Newspaper Editor-in-Chief Rovshan Kabirli and the newspaper's department editor Yashar Agazade have been held in the Investigative Detention Center #1 for five months in 2007 due to a lawsuit filed against them by J. Aliyev.