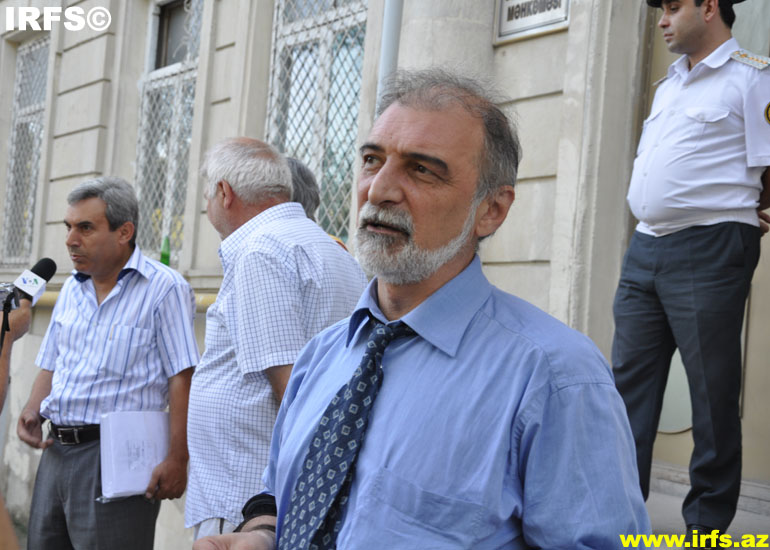 Today, 4 September in the Sabail District Court, under the chairmanship of the Judge Elnur Hasanov, a hearing was conducted on the lawsuit of Adnan Hajizade`s father Hikmat Hajizade against Sabail District Police Department Investigator  Ziya Aliyev in connection with violation of right of respect to his personal and family life.
The lawsuit was under consideration by Judge Kamala Amirkhanova at the beginning. Now Judge Elnur Hasanov is considering the case because K.Amirkhanova left for vacation.
H.Hajizade said that Emin Milli`s parents appealed to Court under the same claim. Therefore, the parents filed a motion to join the two lawsuits in one consideration.
Judge E.Hasanov said that he is not familiar with the case materials yet. Then the judge scheduled the next hearing on H.Hajizade`s lawsuit for 14 September at 4:00 p.m. and the hearing on Emin Milli’s father Pasha Abdullayev`s lawsuit for 14 September at 5:00 p.m.
On 8 July, at approximately 8:00 p.m., Emin Milli and Adnan Hajizade were sitting at a table in “Lebonese” (Livan) restaurant along with several other young adults, when two people that looked like sportsmen came up to them, and attacked them causing physical injuries. Although they appealed to police as victims, police detained Adnan and Emin as suspected persons for 48 hours and freed the attackers. On 10 July, Sabail District Court issued a decision under article 221.2.1 (hooliganism) of the Criminal Code to sentence Emin Milli and Adnan Hajizade to two months pre-trial detention. On July 20 the Appellate Court upheld the decision of the lower court. Investigation of the criminal case was concluded and a criminal case under articles 221.2.1 (hooliganism) and 127 (inflicting intentional minor bodily harm) was instituted against E.Millli and A.Hajizade and the case was sent to court to be considered. Their parents have not been allowed to visit them.
Previous Post

HEARING CONDUCTED ON LAWSUIT OF IRFS CHAIRMAN AND IRFS EMPLOYEE