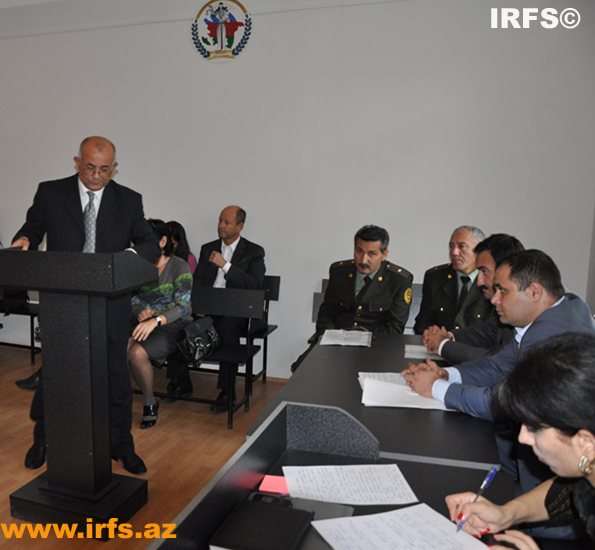 Today, 15 October, in the Nasimi District Court, under the chairmanship of Judge Ikram Shirinov, a hearing was conducted on the lawsuit of “Tolishi Sado” Newspaper Editor-in-chief N.Mammadov`s wife Maryam Mammadova and son Emil Mammadov against the Ministry of Finance, the Justice Ministry’s Penitentiary Services, Chief Medical Office of the Justice Ministry, Prison #15 and the Penitentiary Service’s Treatment Facility regarding the journalist’s death.
The plaintiffs’ representative Ramiz Mammadov said that Novruzali Mammadov’s right to live was violated by law enforcement organs, and this was because he promoted the Talysh language and culture. R.Mammadov noted that their repeated appeals to transfer N.Mammadov to the treatment facility while he was held in prison remained unanswered. Besides, the information inquiries regarding the diagnosis of N.Mammadov’s illnesses were not responded to.
The Justice Ministry Penitentiary Services Representative Elshan Hasanov stated that what R.Mammadov said is unfounded. Hasanov added that N.Mammadov refused to be transferred to the treatment facility.
“When a check-up was conducted into the conditions in which he was held, it was found out that his claim that the prison conditions were bad was unfounded,” said E.Hasanov.
The hearing on this case was scheduled to continue at 4:00 p.m. on 16 October since the work day was over.
“Tolishi Sado” Newspaper Editor-in-chief N.Mammadov died in the Justice Ministry’s Penitentiary Services’ Central Hospital on 17 August 2009. Mammadov was transferred to the Justice Ministry’s Penitentiary Services Central Hospital on 28 July 2009 after his health worsened. His relatives claim that he did not receive necessary treatment and as a result he died.  In 2007, during a closed hearing, N.Mammadov was sentenced to ten year imprisonment under article 274 (treason) of the Criminal Code of Azerbaijan Republic. However, N.Mammadov, who had Talysh nationality, did not consider himself guilty and claimed that his arrest was related to ethnic-political motives and freedom of speech.
Previous Post