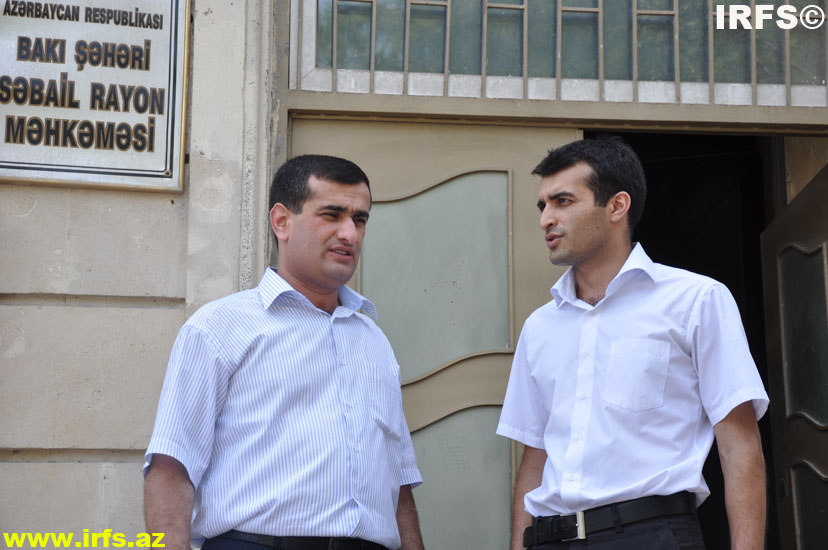 On the 16th of August a hearing was held on the lawsuit of TV and Alternative Media Development Centre Public Union founder Rasul Jafarov and Muhakime newspaper’s Editor-in-chief Yashar Agazade against the National TV and Radio Council (NTRC) in the Sabail District Court, under the chairmanship of Judge Kemale Amirkhanova.

The plaintiffs and the representative of the defendant, Togrul Mammadov, were present in the hearing.

Plaintiff Yashar Agazade said that he defended the lawsuit. He stressed that the NTRC’s failure to grant them a license and to hold new tenders is a violation of the right to freedom of expression. Agazade said that in the lawsuit they referred to the decisions of the European Court of Human Rights and noted that local courts should use these decisions as precedents and asked the court to fulfill the lawsuit.

The defendant’s representative Togrul Mammadov said that the lawsuit is unfounded because the licenses are given on the basis of tenders only and asked the court to not fulfill the lawsuit.

Rasul Jafarov put forth a motion to send an information inquiry to the Constitution Court to comment on article 16 of the Law on TV and Radio Broadcasting. He emphasized that this law reflects an item regarding obtaining the list of free frequencies from the NTRC via inquiries not less than once a year and publishing them in the media.

“Therefore, I believe that the notion ‘not less than once a year’ means that tenders should be announced within this time period to grant licenses,” said Jafarov and asked the court to send the inquiry to clarify this issue.

TV and Alternative Media Development Centre Public Union founder Rasul Jafarov and Muhakime newspaper’s Editor-in-chief Yashar Agazade appealed to the NTRC in order to get a license to broadcast radio programs on a frequency used in Baku and the Absheron peninsula. NTRC told them that there were many free frequencies; however the organization refused to assign them an official frequency or grant them a license. The plaintiffs filed an appeal against the NTRC and asked the courts to deem the act of the government entity illegal and to force the NTRC to give them license.