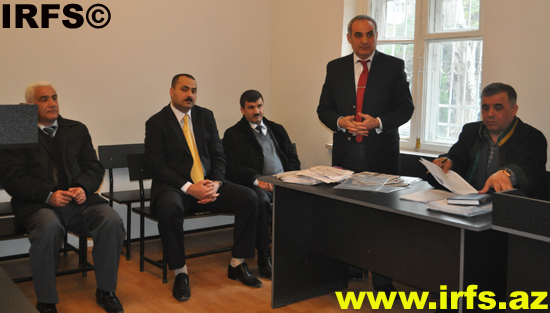 Yesterday, 3 March, in the Nasimi District Court, under the chairmanship of Judge Ikram Shirinov, a hearing was held on the lawsuit of Tezadlar newspaper editor-in-chief Asif Merizli against Press Council Chairman Aflatun Amashov.
Tezadlar newspaper editor-in-chief Asif Merizli, his lawyer Alirza Habilov, and defense representative Shamsaddin Aliyev took part in the hearing.
Lawyer Alirza Habilov filed a motion to submit to the court the protocol of the meeting where Tezadlar newspaper was announced as a racketeering press and the registration book on complaints and applications that are received by the Press Council.

Judge I.Shirinov scheduled the next hearing on this case for 12 March, at 3:00 p.m.

On September 16, 2009, PC included Tezadlar newspaper on the list of “racketeering” publications after an article regarding the opening of Turkey-Azerbaijan borders was published in the newspaper on 29 August, 2009. The newspaper’s editor-in-chief A.Merizli considered it unfounded and appealed to court.