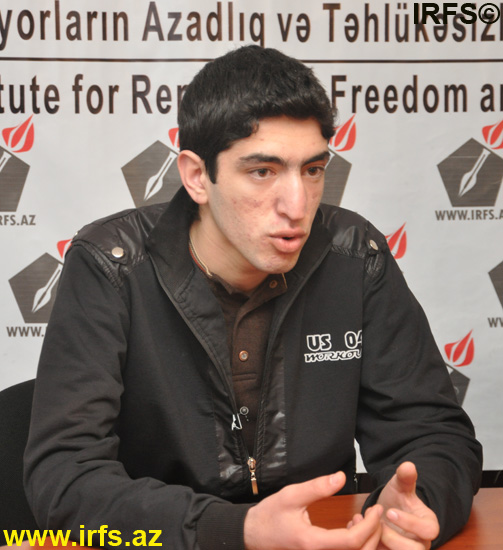 Today, 4 March, Poligon information agency’s editor Elmin Bedelov gave a statement in Bilesuvar region prosecutor’s office. The Institute for Reporter’s Freedom and Safety was told this by Elmin Bedelov today. In his statement, he said that he did not evade military service; he did not receive an invitation from the military commissariat, and he did receive an order regarding his dismissal from the university on 2 February.
Elmin Bedelov was dismissed from the State Oil Academy on 19 January 2010. On 12 November 2009 Elmin Bedelov published an article on pia.az website (“Reportage from Azerbaijan State Oil Academy”) regarding bribe cases and financial frauds in the Azerbaijan State Oil Academy. The student-journalist claims that pressure used against him and his failures are related to his article. On 17 February he appealed to the Nasimi District Court to restore his rights. Tomorrow, 5 March, at 4:00 p.m., in the Nasimi District Court, under the chairmanship of Judge Ikram Shirinov, a preliminary hearing will be conducted.
Previous Post