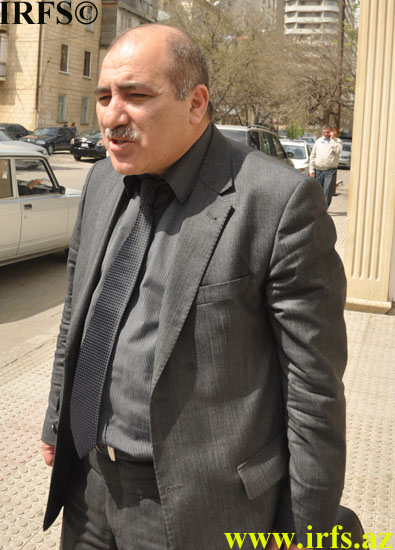 Today, 22 April, in the Yasamal District Court, under the chairmanship of Judge Khagani Mammadov, a hearing was held on the lawsuit of MP Penah Huseyn against the Minister of Labor and Social Security of Population, Fuzuli Alakbarov.
Panah Huseyn spoke and filed a motion to record the hearing, change the content of the lawsuit, demand that the information inquiry be responded to, and have Fuzuli Alakbarov reprimanded.

The defendant’s representative said that only one information inquiry by Panah Huseyn was received by the Ministry of Labor and Social Security of Population, which is unrelated to the inquiry in question.

Panah Huseyn put forth a motion to submit to the court the registry book for the letters that the ministry received in August 2007. The judge fulfilled this motion and scheduled the next hearing on this case for 29 April at 11:00 a.m.

P.Huseyn appealed to the Ministry of Labor and Social Security of Population verbally and in writing in 2007, and requested the list with the names of people living in Sabirabad receiving targeted social assistance, their addresses, the sum of the aid they received and the time when the commission issued decisions. Although the inquiries sent before and after this date were responded to in general, the Ministry did not respond to the written inquiry addressed on 23 August, 2007.