HEARING ON IRFS CHAIRMAN’S LAWSUIT TO CONTINUE NEXT WEEK 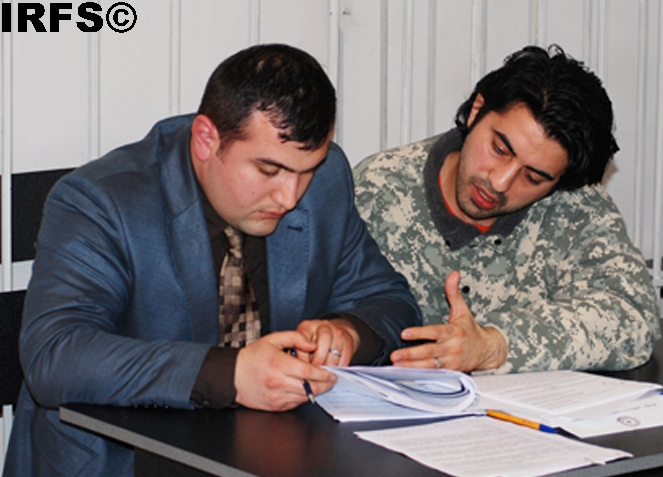 Today, 21 May, in the Nasimi District Court, under the chairmanship of Judge Ikram Shirinov, a court hearing was held on the lawsuit of Institute for Reporters' Freedom and Safety Chairman Emin Huseynov against the Ministry of Interior, Nasimi District Police Department and Police Unit 22 of the Nasimi District Police Department. The lawsuit stems from police pressure that Huseynov was subjected to in June 2008.
Emin Huseynov’s lawyer, Media Rights Institute employee Elchin Sadigov and Nasimi DPD Police Unit #22 lawyer Mazahir Shahbazov participated in the hearing. A representative of the Ministry of Interior was present, but had to leave the hearing.
Witnesses introduced by the defense – Baku city Head Police Criminal Investigation Department Representative Orkhan Akhundzade, Chief Operation Commissioner Zeka Safarov, Operation Commissioner Farid Namazov and Elmir Huseynov gave witness accounts during the hearing. The statements made by the witnesses were related; however Farid Namazov and Elmir Huseynov did not permit photography, even though the judge gave permission. The witnesses said that there were 50-60 people approximately in “Alaturka” restaurant, and they did not use force against them. They let the ones with ID’s free, but took others to Nasimi DPD. The police employees said that they released them all after their identities were determined and they don’t remember anything else.
After listening to the witnesses, Judge I. Shirinov scheduled the next hearing for 26 May at 3:00 p.m. to review the café and to evaluate the evidence on the case.
On 14 June 2008, a group of fans of Cuban revolutionary Ernesto Che Guevera was trying to conduct an event in "Alaturka" Restaurant when the employees of law enforcement organs interfered. IRFS Chairman Emin Huseynov, who was there observing and filming the event, was beaten by police in the Police Department 22. Emin Huseynov lost his consciousness due to police pressure and received treatment for more than twenty days in the hospital.
Previous Post

APPEAL OF “RADIO LIBERTY” NOT FULFILLED

JUHI CONDUCTS ROUND TABLE IN CONNECTION WITH JOURNALISTS’ SOCIAL PROBLEMS