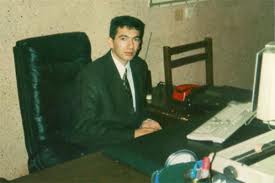 On July 10th Shirvan Appeals Court under judge Ismayil Ahmadov held a hearing on the appeals brought by Law and Order 2010 NGO head and human rights activist Taleh Khasmammadov and by the plaintiffs.
The hearing was attended by Taleh Khasmammadov, his lawyer Asabali Mustafayev, public prosecutor Siyavush Sadigov, and plaintiffs: police officers Nazim Ahmadov, Mahir Isayev and Zahid Mammadov.
The judge heard speeches from both sides. One of the plaintiffs said he did not agree with the decision of Kurdamir Regional Court, and asked the judge to replace Khasmammadov’s current 4 years in jail sentence with 5 years in jail.
In turn, Khasmammadov declared that he is innocent as he believes he was slandered and arrested for his professional activities, and asked the judge to acquit him.
Lawyer Asabali Mustafayev filed a motion with the court asking to change Khasmammadov‘s pre-trial detention sentence, to which the public prosecutor objected. The motion was denied by the judge.
Following this, the judge appointed the next hearing for September 18th 11:00am.
Taleh Khasmammadov was arrested on November 12th 2011. He was charged with hooliganism against police officers and charges were launched against him under Article 221.2 and 221.3 (hooliganism). He was later charged with Article 315 (resisting and using physical assault against a government official). On April 20th Kurdamir Regional Court sentenced him to 4 years in jail.
Previous Post