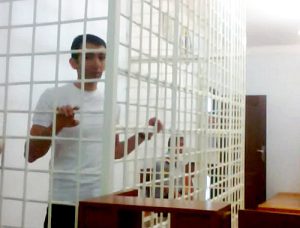 According to him, four patrol officers of Goychay RPD attacked his brother, beat him and forced him into their car, and his two fingers got caught in the car door and were broken in the process. In protest at his illegal detention and beating, Valeh Khasmammadov injured his own hand and arm with a piece of glass and lost consciousness. However, held at the Temporary Detention Facility of Goychay RPD, Valeh was not provided any medical aid. He was told at the police department that he had once beaten a woman by name Gunel and would therefore be arrested.

Valeh Khasmammadov has stated that he does not know such a woman and it is a put-up job designed by the police. According to Taleh Khasmammadov, although freed, his brother has been called to the police department for re-interrogation on December 26.

Human rights defender Taleh Khasmammadov himself has been jailed twice before. According to Khasmammadov, the local police have been monitoring his activities even after his release and collecting fabricated complaints against him.