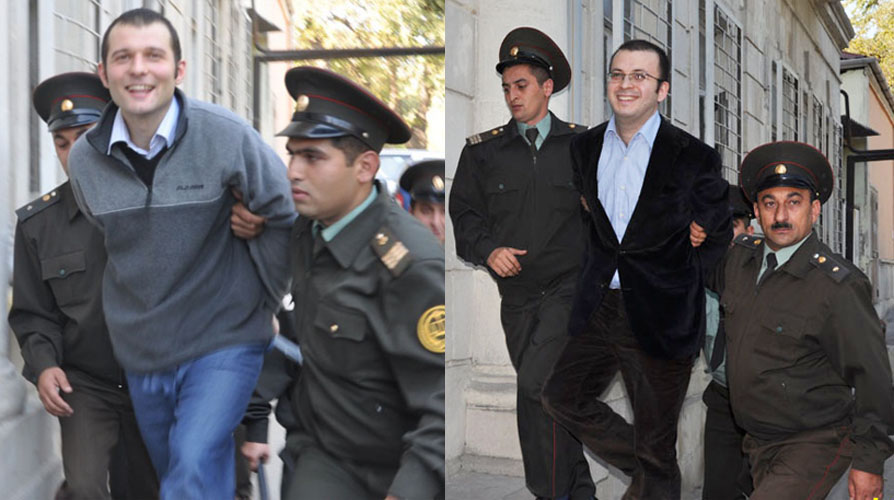 Hikmat Hajizade told the Institute for Reporters` Freedom and Safety that he visited his son, imprisoned youth blogger Adnan Hajizade, who is being held in prison # 14, on the 29th of August.
According to Hajizade, his son did not complain about prison conditions or his health.
Natella Abdullayeva told the Institute for Reporters` Freedom and Safety that two days ago she visited her son, imprisoned youth blogger Emin Milli, who is being held in prison # 5. She added that her daughter-in-law (Emin Milli`s spouse) also visited Emin Milli.
According to Abdullayeva, her son suffers from rhinitis and has become allergic to the smell of cigarettes in prison.
BACKGROUND
On 8 July 2009, at approximately 8:00 p.m., Emin Milli and Adnan Hajizade were sitting at a table in “Lebonese”  (Livan) restaurant along with several other young adults, when two people who looked like sportsmen came up to them and attacked them. Milli and Hajizade were both physically injured in the attack. Although they appealed to the police as victims, the police detained Milli and Hajizade as suspects for 48 hours but freed the attackers. On 10 July 2009, Sabail District Court judge Rauf Ahmadov issued a decision under article 221.2.1 (hooliganism) of the Criminal Code to sentence Milli and Hajizade to a two-month pre-trial detention. On 20 July 2009, the Appellate Court upheld the decision of the lower court. The investigation of the criminal case (special format lawsuit) ended, and a criminal case (special format lawsuit) under articles 221.2.1 (hooliganism) and 127 (inflicting intentional minor bodily harm) was then opened against Millli and Hajizade.  This case was sent to the Sabail District Court for consideration.  On 11 November 2009, the court sentenced Milli to 2,5 years and Hajizade to 2 years in prison.  On 10 March 2010, the Baku Appellate Court adopted a decision to uphold the verdict of the Sabail District Court. Local and international organizations recognize the youth bloggers as prisoners of conscience.
Previous Post