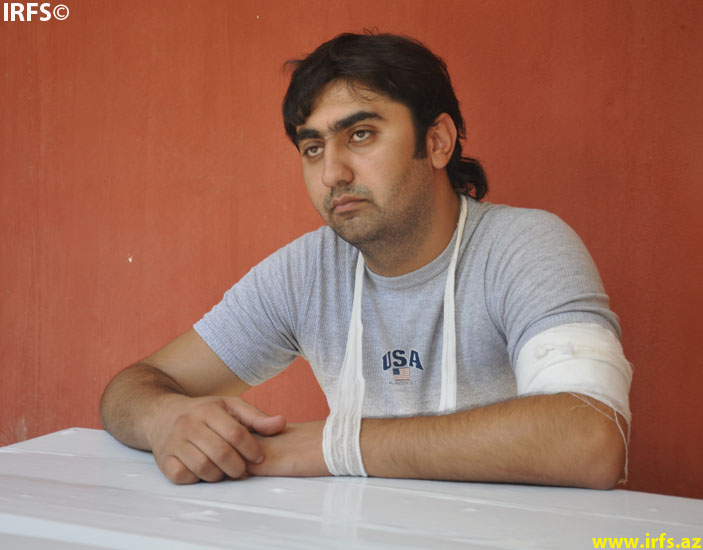 Yesterday, on 30th of August, at about 11 p.m., Komanda newspaper’s sports writer Rasul Shukursoy was stabbed.
The journalist told the Institute for Reporters Freedom and Safety (IRFS) that yesterday he got off the bus in an area called Merkez and was on his way home when he felt that somebody was following him.
“I was about 700 to 800 meters from my home when he reached me,” said Rasul Shukursoy. “I turned and at this point he swung at me towards my heart with a knife. I was quick enough to avoid the blow at my heart, and therefore it hit my arm. I kicked him immediately and his knife fell on the ground. Fighting hand-to-hand, I saw him trying to grab the knife and I quickly left the scene. That person also left quickly in the opposite direction.”
Shukursoy added that he went home after the incident.
After receiving first aid at hospital, he appealed to the Binagadi district Police Department Police Unit 4.
Stressing that he has no personal enmity with anyone, the journalist added that the incident may be connected with his professional work, namely with football player Mahmud Gurbanov’s assault which took place at the editorial office on August 22nd.
According to Komanda newspaper, Gurbanov became angry after the  article entitled “The person, who changed his reputation with money” was published in the newspaper on August 15th, came to the editorial office of Komanda newspaper, injured the editor-in-chief, insulted the newspaper’s employees and damaged property within the editorial office.
“After this incident the editorial office received threatening emails,” said Shukursoy. “One of the emails stated that they don’t want to kill editor-in-chief Rashad Ergun and editor Natig Mukhtarli because they are married; however Rasul Sukursoy should be protecting himself or something bad will happen to him.”
The journalist emphasized that they were offered money to end the issue with Mahmud Gurbanov. Shukursoy believes that this incident is linked to these emails. He noted that either the player himself or the people wanting to benefit from this may have a connection to the incident.
Komanda newspaper editor-in-chief Rashad Ergun confirmed that the newspaper received threatening emails and talked about the content of those emails.
“The letters, which were sent under the names Famil Salamov and Yalcin Gurbanov, claimed that the office employees, especially Rasul Shukursoy and myself are in danger,” the editor-in-chief emphasized.
Football player Mahmud Gurbanov told IRFS that he has no relation with emails or the stabbing of the journalist.
“I don’t know this journalist at all,” said Mahmud Gurbanov. “If I have something to tell somebody, I do it directly, and I have never sent any emails to anyone. I suppose it is an incident set-up against me or Komanda newspaper’s blackmail plan.”
Gurbanov spoke about the conflict that occurred in the editorial office recently. He stressed that a dispute erupted with the employees in the editorial office, but he didn’t injure anyone or damage any property.
IRFS attempted to learn the position of the Police Unit #4 on this issue; however no one returned the phone calls.