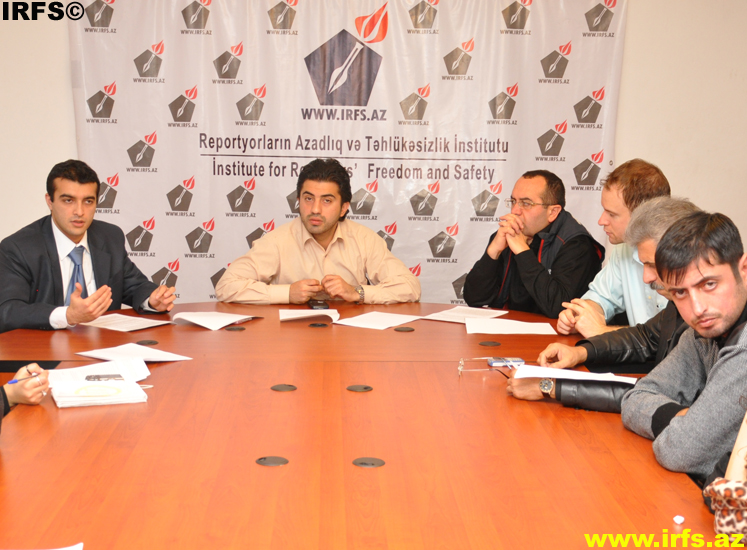 Today, 4 December, in the press center of the Institute for Reporters` Freedom and Safety, presentation of the report was conducted regarding initial conclusions of the monitoring of the television channels during municipal elections within the framework of  “Free Airwaves” project, which is financed by the European Commission.
IRFS Chairman Emin Huseynov said that the monitoring of the television channels is funded by the German Marshal Fund during election period and added that the preparation of two main reports, and one mid-term report will be prepared within the framework of the project.
According to Emin Huseynov, there will be relevant recommendations in the final report regarding the conclusions of the monitoring that includes the Election Day.  Monitoring of the 8 nationwide television channels (AZTV, Public Television, Idman-Azerbaycan, ANS, ATV, Lider, Space, and Khazar) and also two television channels (NTV and Channel 35) that are broadcast in the Nakhchivan Autonomous Republic. Emin Huseynov said that there were initial recommendations reflected in the presented report. Allocating of free air time to candidates and political parties, and implementation of educational programs in a compulsory form in television channels, especially television channels that are funded by state, are included in the recommendations.
Huseynov added that providing legal assistance to people whose rights are violated during the election period is considered in the project and he called on those people to appeal if they face any legal violations.
Media Rights Institute Head Rashid Hajili expressed his opinion regarding recommendations and said that within the framework of the “Free Airwaves” project proposal packet considering amendments to the legislation are being prepared regarding the regulation of the televisions. Rashad Hajili said that if the television channels broadcast socio-political news, they are have to be committed to prepare balanced and comprehensive news, and programs that are connected with elections in the country. R.Hajili noted that public campaigns should be conducted in this direction.
IRFS employee Rasul Jafarov gave information about the initial report. He said that monitored television channels allocated big portion of its time to ruling New Azerbaijan Party (YAP) and its chairman, President Ilham Aliyev. According to Jafarov, most of this coverage was positive and neutral in tone. Jafarov emphasized that educational programs, talk-shows and social advertisings regarding elections should be included in the report as concerning tendencies. The IRFS employee gave examples on the conclusions that are mentioned in the report, and said that the failure to allocate air time to the alternative political actors is shown in the report as a negative tendency.

To view the report: