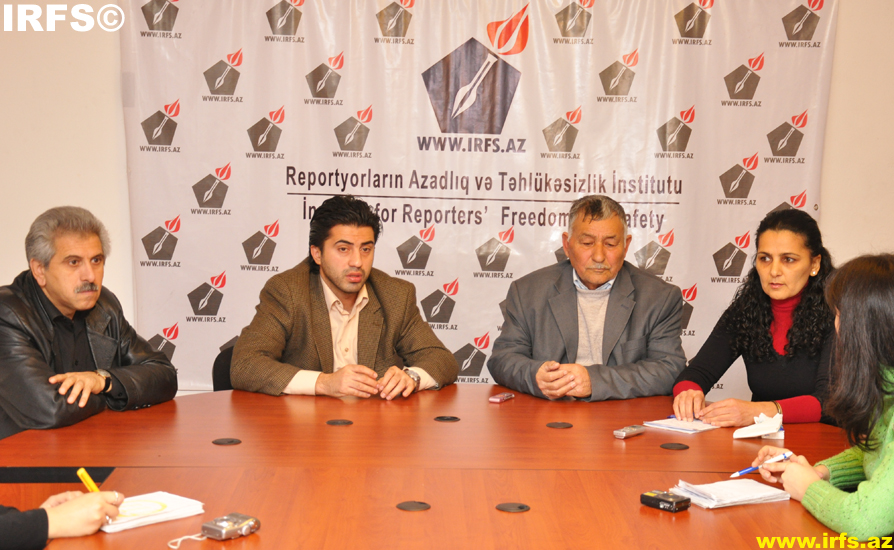 Today, 4 December, in the press center of the Institute for Reporters` Freedom and Safety (IRFS), Bizim yol newspaper correspondent Mushfig Huseynov’s father Tofig Huseynov and his relatives held a press conference regarding the serious deterioration in the health of the journalist. Mushfig Huseynov`s father Tofig Huseynov said that two month treatment did not yield in any positive changes in his son’s health.
“Mushfig suffers from tuberculosis and his temperature has never been lower than 38 Celsius degrees since he began his treatment,” said Tofig Huseynov. “However, the penitentiary services claim that his temperature is between 37.1 and 37.2 degrees Celsius. Mushfig`s health has reached the most serious phase because he is not receiving the right treatment. Mushfig now has drug-resistant TB which is incurable. This is a serious threat to his life, and it is necessary that Mushfig receives treatment in home condition to prevent the disease from advancing and to prolong his life. Mushfig said that three people passed away after he was transferred to this hospital. This is very depressing for a person that has the same disease.”
T.Huseynov added that when they appealed to court to release him due to his tuberculosis, the Penitentiary Services said that Mushfig is healthy.
“However officials from the Penitentiary Services now claim that Mushfig had this illness before he was arrested,” noted T.Huseynov and called upon human rights defenders to visit Huseynov and to achieve his release. M.Huseynov`s father stressed that Mushfig has two very young children, one of which is disabled, and added that he would appeal to the president in the coming days to pardon Mushfig Huseynov.
IRFS chairman Emin Huseynov said that several times he appealed to the relevant organs to visit M.Huseynov, but never received permission to visit the ill journalist.
“Every time, we were told to appeal to the Public Committee under the Justice Ministry. The Public Committee doesn’t respond to our appeals”.
E. Huseynov added that a roundtable will be conducted regarding M.Huseynov’s situation on 7 December, at 2:00 p.m. They will appeal to several human rights defenders, human rights defenders represented in the Public Committee, the Penitentiary Services and the Ombudsman Administration to participate in the conference.
On 14 October M.Huseynov, who suffers from tuberculosis, was transferred from prison #2 to the Penitentiary Services Specialized Treatment Facility for Tuberculosis prisoners because his health deteriorated seriously. The journalist claims that although his health deteriorated since he was transferred to the facility, he is not receiving the necessary treatment.
Mushfig Huseynov was convicted under Article 311.1 (receiving of a bribe) of the Criminal Code in July, 2007 and on 21 January 2008 was sentenced by Grave Crimes Court Judge Jamal Ramazanov to 6 years of imprisonment. However, this sentence was reduced to 5 years through a decision adopted by the Appellate Court.
Bizim yol newspaper has been published since 2003 and operates as daily newspaper.