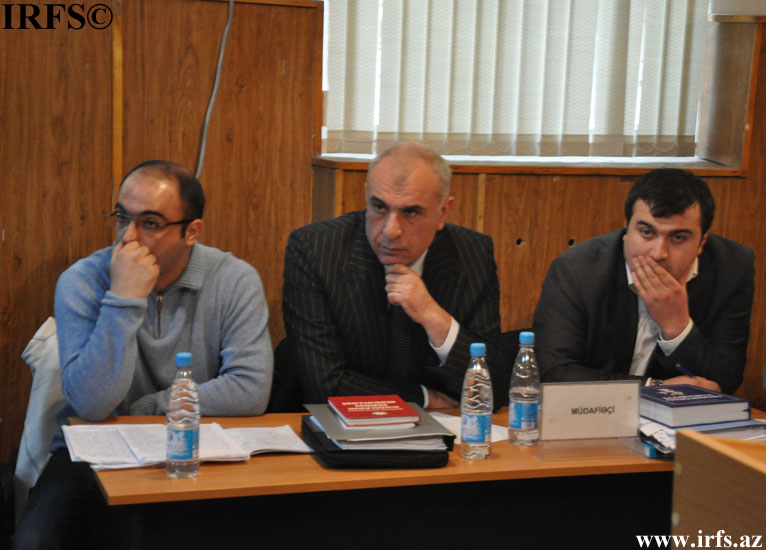 Today, 28 April, in the Garadag District Court, under the chairmanship of Judge Ismayil Khalilov, the hearing was continued on the crime case against Eynulla Fatullayev.
The Prison #12 operation department chief Kerem Shirinov, whose interrogation was stopped in the last hearing, responded to the questions from both sides and the judge. Shirinov claimed that he did not believe narcotics were implanted on Fatullayev, and this drug did belong to Fatullayev himself. However, Shirinov could not answer questions if whether or not Fatullayev’s clothes were left unsupervised at night, and at what time Fatullayev took a shower. Further, Shirinov said that Fatullayev did not object to the case witnesses during the searching, all his rights and duties were expressed to him and appropriate documents were compiled. According to the editor-in-chief’s lawyer Isakhan Ashurov, there was not any note in the protocol compiled on the investigation regarding the explanation of rights and duties of case witnesses, and people on whom the search was conducted.
The other witnesses who gave accounts freely were Prison #12 Chief Avtandil Agayev and Prison #12 Operation Commissioner Behruz Guliyev.  Agayev answered the questions given by the lawyers, and said that on 28 December, at the end of the working day, he issued the decision regarding the search to be conducted on 29 December, at 9.30.  However, he admitted that he did not come to work on 29 December, at 9.30; however, he came to the place where the search took place after Fatullayev’s demands. Agayev avoided answering questions regarding the reason why the search was conducted on 29 December though the decision was issued on 28 December, and on 28 December, on the same day that the decision was issued, Fatullayev was in the operation department during several hours accepting letters.
“However, the decision to conduct a search without the court’s decision is adopted only in the necessary and urgent cases,” said Isakhan Ashurov. “Therefore the investigation should be conducted on the same day when the decision was issued, because prisoners’ having narcotic substances demands the urgent steps.”
Behruz Gulyev said that he did not search all of the parts of Eynulla’s jacket and he took apart only the questionable parts, and found narcotics in there. After Behruz Guliyev responded the questions, it was clear that he was the person who found narcotic substance on 2 of 3 people, took this substance to the court examination, and brought them to the prison after getting the result of the examination. Agayev and Guliyev answered some questions as “I don’t recall”, “I forgot.”

Fatullayev filed a motion in the hearing. He said that the amount of the substance was not measured and this is contrary to the articles of the Criminal- Procedural Code. Fatullayev asked the court to not accept the narcotic substance as material evidence. The judge said that he would consider this motion.

The next hearing was scheduled for 30 April, at 2.00 p.m.
The European Court of Human Rights issued a decision regarding the case of imprisoned Editor-in-chief of Gundelik Azerbaijan and Realniy Azerbaijan Newspapers Eynulla Fatullayev. The decision states that the journalist should be released immediately and the Azerbaijani government should pay 27,822 EUR to Fatullayev in compensation.
Eynulla Fatullayev was arrested in the court hall on 20 April 2007 under the decision adopted by the Yasamal District Court on the lawsuit of Refugee/IDP Rights Defense Committee Chairperson Tatyana Chaladze.
After his arrest, a criminal case was opened against Eynulla Fatullayev in the National Security Ministry Chief Investigative Office regarding an article published in Realniy Azerbaijan newspaper, which according to the Ministry of Foreign Affairs, caused foreign citizens and representatives of international organs safety concerns. He was convicted under articles 214.1 (threatening terror), 283.2.2 (incitement of ethnic/national, social or religious hatred abusing authority) of the Criminal Code and was sentenced to pre-trial detention. Eynulla Fatullayev was then convicted under 213.2.2 (tax evasion).
Eynulla Fatullayev was sentenced to 8.5 years of imprisonment on 30 October 2007 under the decision adopted by the Grave Crimes Court and was fined in the amount of 242 thousand 522 AZN.
On 29 December, 0.223 grams heroin was found on Fatullayev. Eynulla Fatullayev and his lawyer assess this incident as an operation set-up to prevent the decision of the European Court of Human Rights (ECHR) regarding the journalist in the near future. A criminal case was opened against Fatullayev in the Garadag District Investigative Department under article 234.1 of the Criminal Code (Illegal purchase or storage without a purpose of selling of narcotics or psychotropic substances in an amount exceeding necessary limit for personal consumption) and he was transferred to the Baku Investigative Prison #2 on 2 January. The investigation into the case was concluded and it is being considered in the Garadag District Court.
Realniy Azerbaijan has been published as weekly newspaper, and Gundelik Azerbaijan was published as a daily newspaper since 2005. Eynulla Fatullayev established the newspapers and was the editor-in-chief of both publications. The newspapers ceased their activity after the arrest of the editor-in-chief in 2007.